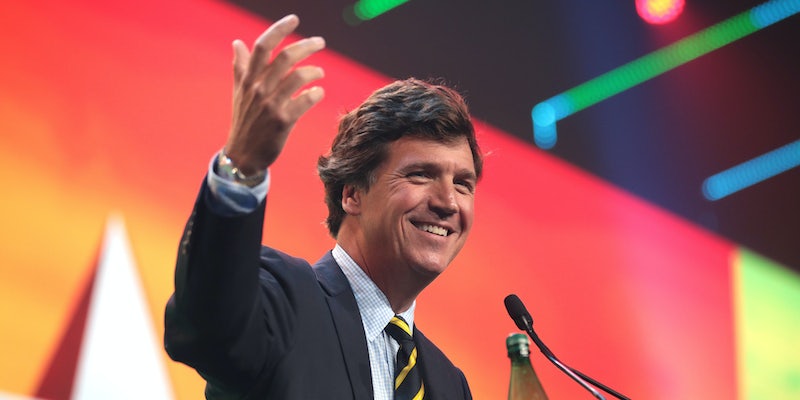 It's under a different Fox entity.

Yesterday, Fox News host Tucker Carlson unveiled a dramatic trailer for his new special, one which will reveal the “true story” behind the Jan. 6 Capitol riot.

In it, he drops real truths like: Americans are being held in Guantanamo Bay for their participation in the riot (not true); that a new “war on terror” has been launched against right-wingers (not true); and that it was a false flag attack (ehhh…. probably not true). The trailer was resoundingly panned.

But there is one truth from the trailer that needs to get out there. Fox News is not involved in this documentary.

Carlson is Fox News’ most popular host, the anchor of its primetime show, the most-watched show on cable news. But this documentary about Jan. 6 is not a Fox News joint.

In our story, the Daily Dot did not mention that the show had Fox News’ backing, just that it was being released by Carlson. We did mention that one prominent conservative called out Fox News’ personalities over it, asking them to denounce it.

But after we ran it, Fox News emailed the Daily Dot with an “Update Request.”

It said at the top of the email “not for publication,” but as PR teams know, you need to agree on the conditions of publication of information before it is provided. The Daily Dot did not agree to Fox’s demand when it was sent this quote, and thus is not bound by the request.

Plus, you should know that even Fox News wants to distance itself from Carlson’s documentary, which claims patriots are being “purged” by the federal government.

“Can you please add so it’s clear that these new episodes are for FOX Nation? The subscription based streaming platform that is behind a paywall. I don’t see that noted anywhere in the piece. Tucker Carlson Originals is not for the channel.”

So there you have it. You must pay and subscribe to Fox Nation to watch the documentary, because Fox News will not be airing it. We want to be clear about that.

We have updated our original piece.