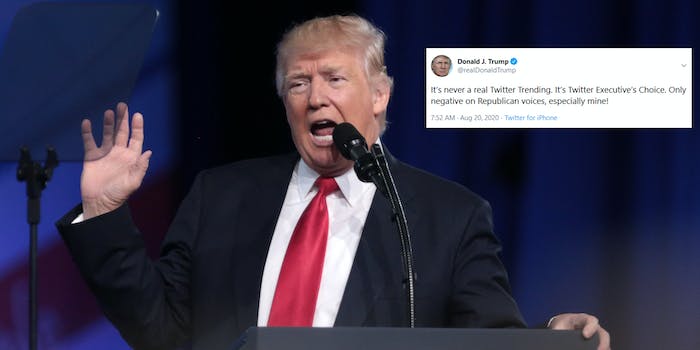 Trump was livetweeting the Democratic National Convention, and his responses led to #TrumpMeltdown to trend.

President Donald Trump complained about Twitter’s trending topics on Thursday morning after his angry tweets about the 2020 Democratic National Convention caused “#TrumpMeltdown” to trend on the platform.

The president tweeted about his complaints early Thursday, while also bringing up his belief that there is a bias against conservatives by social media platforms.

On Thursday morning, #TrumpMeltdown was trending on Twitter, with many people using the hashtag to talk about the president’s live-tweeting of the Democratic National Convention.

During the event, Trump tweeted about speeches by former President Barack Obama and vice presidential nominee Kamala Harris in a series of all caps missives.

Those tweets seemed to spark a #TrumpMeltdown hashtag.

Trump’s complaint against the trending topic will likely only further his criticism that social media companies have an anti-conservative bias. That belief is at the heart of a recent social media executive order he signed that targets Section 230 of the Communications Decency Act.

Section 230 has been called essential to the creation of the modern internet because it shields websites from being liable for what is posted on them by third parties.

Trump’s executive order quickly was met with a legal challenge that asserts it is unconstitutional. Despite this, it is moving through the process and currently is subject to public comments at the Federal Communications Commission (FCC).