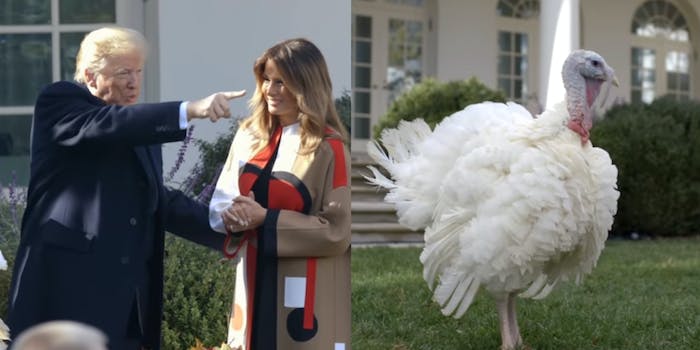 ‘Too bad for Carrots’: Trump’s words to a turkey come back to bite him over election claims

Given how the 2020 election has shaken out, Trump's remarks feel different than they did in 2018.

President Donald Trump has not conceded the 2020 election to President-elect Joe Biden, and has been pushing for recounts, trying to sow discord about the results.

And in 2018, he joked about a turkey doing the same thing and chided the turkey for it during the annual pardon at the White House.

In 2018, the White House had a poll for people to choose which turkey —”Peas” or “Carrots”—should be pardoned. Peas won the vote.

CNN’s Andrew Kaczynski unearthed a clip of Trump’s presidential turkey pardon ceremony in 2018 on Monday, and given how the president has handled losing to Biden, his comments about Carrots wanting a recount feel a bit different than they probably did two years ago.

“The winner of this vote was decided by a fair and open election conducted on the White House website. This was a fair election. Unfortunately Carrots refused to concede and demanded a recount and we’re still fighting with Carrots,” Trump said. “I will tell you, we’ve come to a conclusion, Carrots I’m sorry to tell you the result did not change. It’s too bad for Carrots.”

People online quickly reacted to the clip, given the odd similarities to Trump refusing to concede and demanding a recount.

A lot of people took Trump’s own words—”too bad for Carrots”—and used it against him.

Despite losing the pardon, neither White House turkey was killed—as is tradition—and Carrots went off to live the rest of his days in relative obscurity, something Trump is unlikely to ever do.