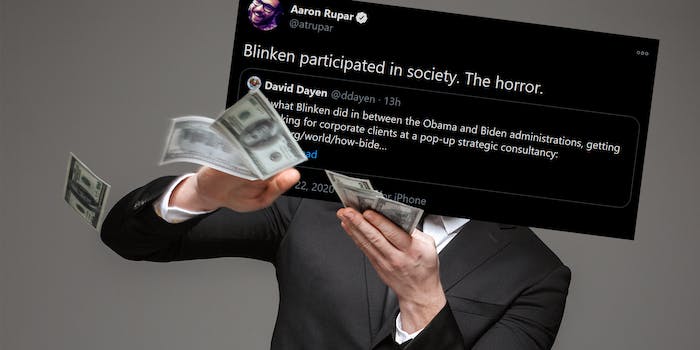 In the before times of oh, says, a month or two ago, the news of any appointment by President Donald Trump—from cabinet-level down to some hereto unknown undersecretary—caused media members to dig into those people’s pasts, looking for unsavory tweets, past statements, previously undisclosed arrests, or anything that might be of use to the public to pass judgment on their character.

While that’s straightforward reporting, many Trump supporters considered it enhanced by an anti-Trump zeal that colored the media’s actions, claiming reporters were only doing this kind of work because they despised the president.

So the Blinken choice is a perfect first test, especially for those who built a brand up of getting astoundingly angry at any action Trump took.

Here’s Vox’s Aaron Rupar posting after a journalist shared a report about how the team around Blinken enriched itself after Clinton’s unexpected 2016 loss to Trump.

“Blinken participated in society. The horror,” he wrote.

It’s a profoundly crass response to an article that highlights the web of connections and alliances and backchannels and, most importantly, monetary motivations of a team that Biden’s assembling to conduct foreign relations. It’s a thing a journalist might be presumably interested in letting the public know about. It’s one thing to criticize the findings of the feature, but a blanket “who care” about the incoming secretary of state is quite a position to tweet as a “journalist,” which is what Rupar’s bio states.

Here’s Rupar himself worked up about the past career of Rex Tillerson, Trump’s first secretary of state.

It’s what a journalist would raise concerns about. So why is Tillerson’s past relevant, but Blinken’s is not? On Twitter, people rushed to ratio Rupar for doing the opposite of what journalists should do.

Quote-tweeting himself after the backlash hit, he called his tweet “too glib.” But it’s not just Rupar. You have Bill Palmer of Palmer Report finding Blinken’s Twitter handle cutesy on Twitter.

The thing about journalism is that it’s inherently adversarial to those in power. So while many believed the media was anti-Trump, there’s nothing inherently wrong with that. The problem is when Trump leaves office and prominent journalists decide that because Biden’s in office, it’s all good.