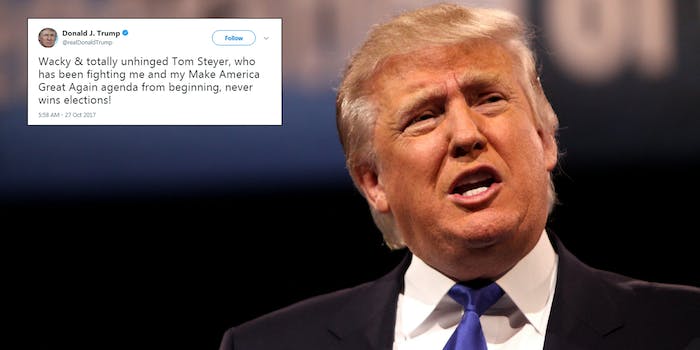 Tom Steyer has started a $10 million advertisement campaign against Trump.

President Donald Trump blasted the billionaire activist who is launching a campaign to impeach him on Friday morning, calling him “wacky” and “totally unhinged.”

“Like you, I’m a citizen who knows it’s up to us to do something,” Steyer says in the ad. “It’s why I’m funding this effort to raise our voices together and demand that elected officials take a stand on impeachment.”

Steyer also calls Trump a “clear and present danger” and “mentally unstable” in the ad, titled “Join Us.”

The television ad will be accompanied by a digital ad campaign, according to Forbes. Steyer donated over $91 million during the 2016 election, according to the OpenSecrets database maintained by the Center for Responsive Politics. Some $65 million in donations were focused on environmental causes and former presidential candidate Martin O’Malley, Forbes reports.

On Friday, Trump hit back against Steyer’s ads calling him “wacky,” among other things.

Wacky & totally unhinged Tom Steyer, who has been fighting me and my Make America Great Again agenda from beginning, never wins elections!

Politico points out that the ad played on Fox & Friends, a favorite program of the president’s, which may have caused him to tweet about Steyer’s efforts.

The ad encourages people to sign a petition on NeedToImpeach.com.