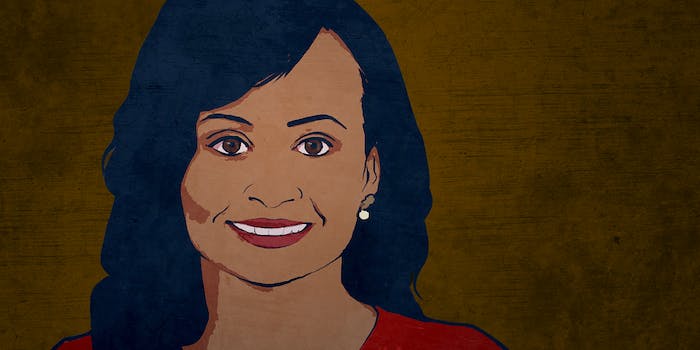 “It seems everyone is a racist these days,” says Trump campaign spokeswoman Katrina Pierson, “regardless of the definition of the word.”

Pierson, who was pummeled by the press this week after mistakenly linking President Barack Obama to the death of an Muslim-American soldier in Iraq, was seemingly in high spirits on Friday, more concerned about the cellphone she dropped not sending out emails than newspapers ridiculing her remarks about Cpt. Humayun Khan.

On social media, Pierson is routinely blasted as a “racist” and often receives comments comparing her to a Nazi. Not without a sense of humor, she occasionally ‘faves’ the more ridiculous ones.

“I’m used to people who know nothing about me tell everyone else who I am,” Pierson told the Daily Dot.

“I support solutions, and law and order.”

At first blush, the American Tea Party activist seems an improbable surrogate for Donald Trump, whose campaign routinely derides the efforts of activists who draw attention to deaths of black men at the hands of police. After all, she was a supporter of Obama’s 2008 campaign. But even after defecting to conservatism, she remained vocal about black victims of gun violence.

While volunteering for Ted Cruz during his 2012 senatorial run, Pierson saw the killing of 17-year-old Trayvon Martin through a drastically different lens than the candidate she vigorously supported. She once compared the treatment of Martin to that of the “9/11 hijackers,” then said it was actually much worse. She also publicly accused Florida police of lying and intentionally botching their investigation into shooter George Zimmerman.

If you're black & have an opinion about #Trayvon murder that doesn't fit the right-wing talking points you must be a liberal. #FallInLine

Responding to the concerns of Sybrina Fulton, Martin’s mother, Cruz argued that so-called Stand Your Ground laws were particularly beneficial to black communities. Pierson, meanwhile, was appalled after Florida woman Marissa Alexander was handed a 20-year prison sentence for firing a warning shot high into a wall behind her abusive husband. (Alexander’s charges were vacated on appeal in 2014.)

“I believe everyone is entitled to their own opinion,” Pierson says of her perceptual differences with Cruz. “Perception is reality, and personal life experiences determine that perception.”

Unlike her boss, Pierson, who is half black, was not gifted with immense wealth. Born to a poverty-stricken mother who was only 15-year-old, Pierson says she grew up receiving government assistance, surrounded by drugs, gangs, and violent crime.

Pierson, who says she idolizes Malcolm X, has defended Trump in interviews over his comments about Black Lives Matter, but rarely has she offered up her own opinion about the movement. “I support solutions and law and order,” she says. “Black Lives Matter is counterproductive. The stark increase in officer executions since their formation is evident.”

Reminder: #MalcolmX was a racist right wing extremist #freedomfighter and a clinger to his guns & religion. I'm in good company #TeaParty

Pierson’s tone, while critical, is more subdued compared to that of Trump, who in an interview last month said that, among many of his supporters, it is viewed as “inherently racist” to even suggest that black lives matter. “Local problems require local solutions,” says Pierson, who notes police departments operate at the discretion of local elected officials. “Mayors, city councilmen are the answer to the grievances of BLM.”

(Two prominent Black Lives Matter leaders did not respond to a request for comment in time for publication.)

The deaths of five police officers in Dallas last month, who were ambushed by a black veteran apparently motivated by a hatred of whites, underscores the risks police officers face on daily basis in today’s racially charged climate. But it is also true that during the Obama administration, the average number of police officers intentionally killed each year has reached historic lows.

As the Washington Post reported last month, through 2015, the average number of officer deaths was 62, compared to 101 under Ronald Reagan, 81 under Bill Clinton, and 72 under George W. Bush.

“If you include the 2016 police officer shootings year-to-date and project it out to a full year, that average of 62 deaths doesn’t change,” writes Post reporter Christopher Ingraham, who collected data from the Officers Down Memorial Page.

Despite her differences with Cruz, now a Republican senator from Texas, over the Zimmerman trial, Pierson believes a hardline defense of the Second Amendment is what’s best for black Americans. She’s not a huge fan of Martin Luther King Jr.—although she once used his likeness in a campaign flyer during her 2014 run against Texas congressman Pete Sessions—because he was “too moderate” and “submissive.”

“I grew up listening to Malcolm X,” Pierson said. “He spoke about exercising your [Second] Amendment rights, starting your own business so you don’t have to depend on others, as well as warning the community of the danger of becoming a monolithic voting block for one political party.”

Pierson’s exaltation of X, whom she notes “encouraged blacks to get guns,” appears sharply antithetical with her views on Islam, a religion she once said “preys on the weak” and uses “political correctness as cover.”

In an email exchange on Friday, Pierson appeared to suggest that X abandoned his religion at some point before his death: “As you know, he left Islam. His post Islam speeches were very much conservative.” In fact, X—born Malcolm Little and later called el-Hajj Malik el-Shabazz—converted to Islam in prison around 1948 and died a Muslim 17 years later.

A Muslim funeral service was held for X in February 1965 at a Christian church in Harlem near West 147th Street. The church was chosen because of X’s separation and repudiation of the Nation of Islam, whose adherents worshiped at New York City’s prominent Mosque No. 7, which was firebombed the day after his assassination.

Reminded that X died a Muslim, Pierson replied: “I criticize radical Islam. There are a lot of non-practicing Catholics that remain ‘Christian.’”