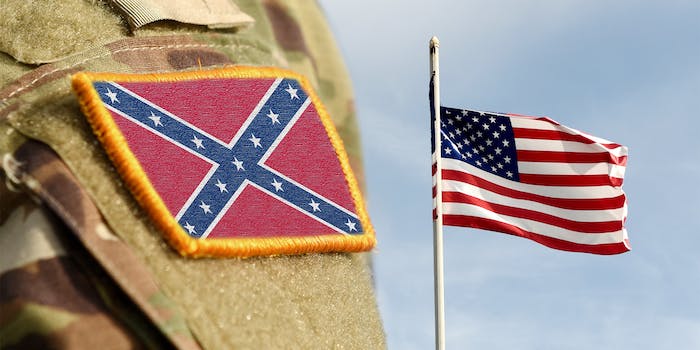 Defeating the Confederacy and repealing Section 230 are now somehow intertwined

It's an odd idea for a trade.

It seems like everyone in Washington, D.C. has a desire to reform Section 230 of the Communications Decency Act—so much so that it is now reportedly intertwined with… the Confederacy?

Section 230 is an important internet law that shields websites from being held liable over the content posted on them by users. The law has become a political football from lawmakers on both sides of the aisle, including both President Donald Trump and President-elect Joe Biden.

Despite the law’s importance, its been subject to a parade of bills, hearings, and denouncements in recent months. Trump has pushed a controversial social media executive order that targets the law, and earlier this week Facebook CEO Mark Zuckerberg and Twitter CEO Jack Dorsey were asked about it during a Senate hearing. Even the Justice Department has weighed in on the law.

Hearings and bills are par for the course in Congress. But the latest twist in the fate of Section 230 is pretty out there.

The New York Times reports that White House Chief of Staff Mark Meadows told Democratic lawmakers that adding a repeal of Section 230 into a military bill that would strip Confederate leaders’ names from military bases might ease the president into actually signing it.

Trump has threatened to veto the bill without the 230 provision, the Times reports, but a Democratic congressional aide said such a deal would be a non-starter.

While lawmakers and Biden have pushed against Section 230, Trump has been one of the loudest voices calling to revoke the law. The president’s executive order—which the Federal Communications Commission (FCC) said it would move forward with—targets Section 230. His pick to join the agency, Nathan Simington, reportedly had a hand in writing that executive order.

That’s not to mention the several times the president has called for Section 230 to be repealed, somewhat ironically, on Twitter.

With Biden set to be inaugurated in January, it’s likely Trump and his allies wanted to drive a stake in Section 230—and social media companies in general—on his way out of office.

Meanwhile, the deal seemed to get the support of at least one Republican senator. Sen. Josh Hawley (R-Mo.) retweeted the New York Times report and added “#repeal230.”