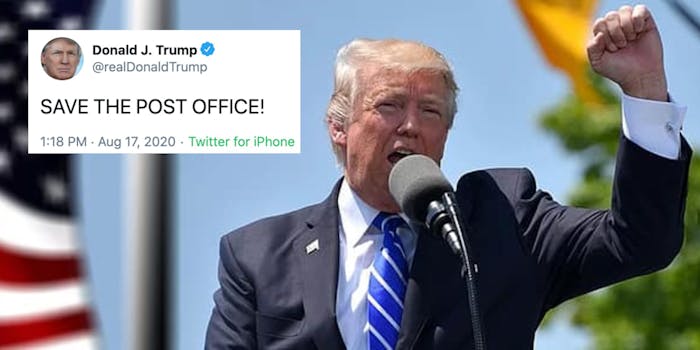 'This is like if Roy More tweeted KEEP CHILDREN SAFE."

President Donald Trump asserted on Monday that the U.S. Post Office must be saved after spending months attacking the government agency.

In a tweet that confused many, the president appeared to voice support for the postal service in an all-caps decree.

The statement follows countless false claims from the president regarding mail-in voting ahead of the 2020 presidential election.

The president has repeatedly alleged that voting by mail would allow the election to be “rigged” despite no evidence supporting his claim.

Even Trump’s Postmaster General, Louis DeJoy, who is accused of making significant changes to the Post Office in an effort to hamper Americans’ ability to vote, has been using absentee ballots for more than 15 years.

Given Trump’s open disdain for the postal service, many were confused by his remarks.

The tweet was bombarded with a wide-range of reactions.

“This is like if Roy Moore tweeted KEEP CHILDREN SAFE,” @briantylercohen said, referencing the disgraced politician and accused pedophile.

Many agreed that the Post Office needed saving, but saving from Trump himself.

Even the notorious tweet-stealers over at The Lincoln Project got in on the action.

Trump denied to reporters at the White House on Monday allegations that he has worked to purposely slow down the mail.

“Wouldn’t do that,” Trump said. “I have encouraged everybody: Speed up the mail, not slow the mail.”

DeJoy, the Postmaster General, is now set to testify next week before Congress on changes he’s made that have resulted in higher prices and longer delays.