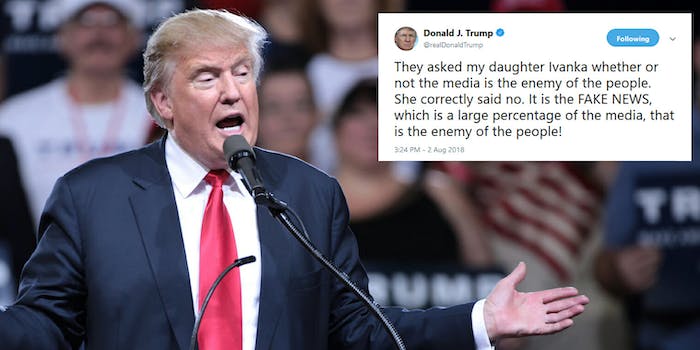 He basically said 'not all media.'

President Donald Trump addressed a comment his daughter Ivanka Trump gave on Thursday morning where she said she disagreed with her father that the media was the “enemy of the people.”

In the president’s mind, everyone was missing a key distinction.

The president first described the press that way in February 2017, where he tweeted that the New York Times, CNN, NBC News, ABC News, and CBS News were not just his “enemy,” but the “enemy of the American people!”

On Thursday Ivanka Trump was asked—during an event hosted by the news outlet Axios—whether she thought the press was the “enemy” of American citizens, to which she answered bluntly: “no, I do not.”

“I’ve certainly received my fair share of reporting on me personally that I know not to be fully accurate, so I have some sensitivity around why people have concerns and gripe, especially when they sort of feel targeted, but, no, I do not feel the media the enemy of the people.”

Also today, when asked several times if the White House believed the press was the “enemy of the American people,” Press Secretary Sarah Sanders declined to answer, only adding that she was there to “speak on behalf of the president” and that Trump had “made his comments clear.”

This exchange between @acosta and @PressSec is important and says a lot about our country right now.

This is Acosta's second attempt to get Sanders to say the press is not — as Trump has described them — "the enemy of the people," and she declines. pic.twitter.com/YjJVM0Dukg

Trump’s disdain for the press has reached his most ardent supports. During a rally in Florida earlier this week, a reporter posted a video of the crowd shouting at members of media covering the event and giving them the middle finger.