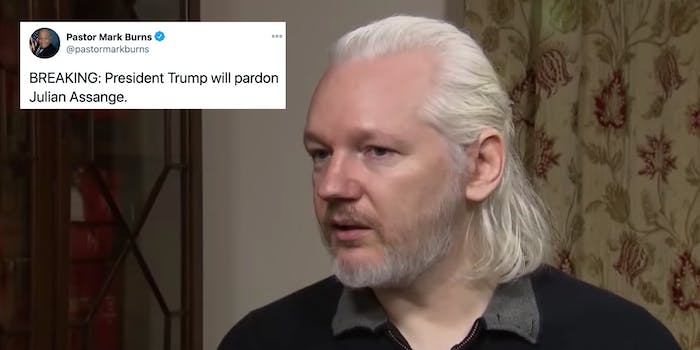 Pro-Trump pastor Mark Burns alleged a pardon was in the works before recanting his statement.

Pastor Mark Burns, who gained notoriety after voicing support for Trump at the 2016 Republican National Convention, alleged on Twitter that the anti-secrecy activist would soon be granted clemency.

The tweet has quickly racked up tens of thousands of retweets and was even retweeted by NSA whistleblower Edward Snowden, who has repeatedly called on the president to pardon Assange.

“I very much hope this is true,” Snowden wrote. “The case against Assange is based on a legal theory that would criminalize the work of every journalist, both at home and abroad.”

Not long after though, Burns called on his more than 177,000 followers to disregard his tweet. By that point, the term “Assange” had already becoming a trending topic on Twitter.

Before it was walked back, a White House official told the Daily Dot that they did not believe Burns’ claims to be true.

Similarly, journalist Ben Quinn noted that sources close to WikiLeaks and Assange have said that they have not received any official notice from the White House regarding a pardon.

Assange is currently being held in a U.K. prison after his arrest at the Ecuadorian Embassy in London in April 2019. Assange, who had spent roughly seven years in the embassy, was sentenced for violating the terms of his house arrest linked to a now-dropped sex crimes investigation out of Sweden.

The U.S. is currently seeking to extradite Assange to face charges over violations of the U.S. Espionage Act as well as the Computer Fraud and Abuse Act.

The case, which is directly linked to WikiLeaks’ publishing of classified U.S. data, has received significant pushback from across the political aisle given the precedent such a case would represent for press freedom.

While it’s entirely possible that a pardon could take place before Trump leaves office, no evidence at this time indicates that there is any plan to do so.