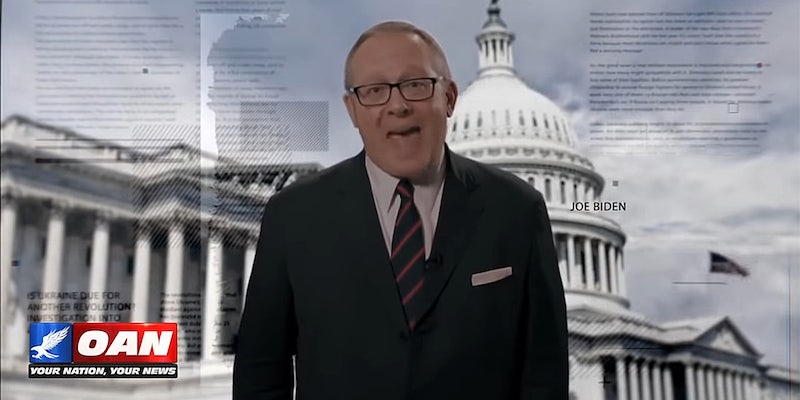 OAN busted for airing anti-Biden documentary made by Russian spies

The network has a fraught relationship with the truth and the 2020 election.

When One American News Network (OAN) aired the My Pillow Guy’s 2020 election fraud documentary, the company put up a massive disclaimer before it ran, noting that it was an independently produced film by Mike Lindell and the news network had nothing to do with it.

That came as OAN was facing a possibly lawsuit over its constant inaccurate claims of election fraud in 2020.

Perhaps it should have been similarly rigorous with the films it aired before the election as well.

U.S. intelligence officials concluded that The Ukraine Hoax: Impeachment, Biden Cash, and Mass Murder, a film which aired on OAN in January 2020, was produced by Russian intelligence agents Konstantin Kilimnik and Andrii Derkach, according to a report released yesterday by the Director of National Intelligence.

That report, “Foreign Threats to the 2020 U.S. Federal Elections,” is an intelligence community assessment regarding foreign interference in the 2020 election.

It states that “Derkach, Kilimnik and their associates … made contact with established U.S. media figures, and helped produce a documentary that aired on a U.S. television network in late January 2020.” While it doesn’t name a network in the report, intelligence experts have confirmed the only news outlet and film matching that description is OAN.

OAN has since entirely removed the film from their website. This Russian-dubbed version created by a man in Sumy, Ukraine, is still available.

Kilimnik is also named as a “Russian intelligence officer” in the Senate Intelligence Committee’s Report: “Russian Active Measures Campaigns and Interference In the 2016 Presidential Election.” Andrii Derkach has been an “active Russian agent” for over a decade, according to the U.S. Treasury Department.

But given OAN’s lax standards and distaste for rigorous reporting, this shouldn’t be all that surprising.