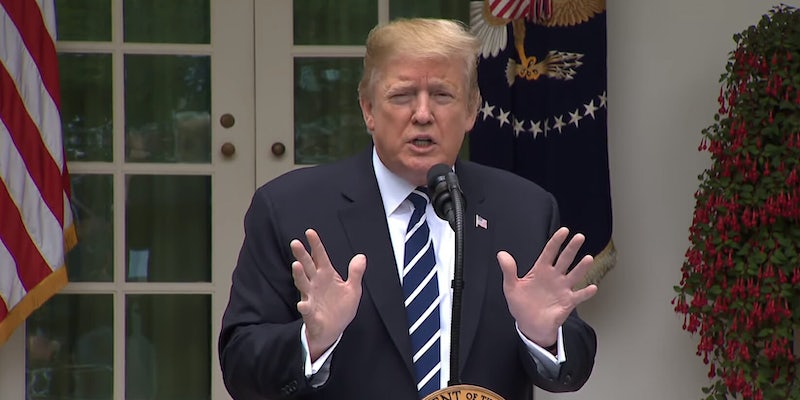 President Donald Trump hosted a hastily put together press conference on Wednesday, shortly after a meeting with Democratic congressional leadership about infrastructure that reportedly broke down.

However, a Washington Post photographer snapped a photo of handwritten notes the president brought with him, which appear to have been written in black sharpie, where he misspelled the word “accomplishments,” instead writing “achomlishments.”

The notes specifically say “Dems have no achomlishments.”

Trump notes captured by @jabinbotsford:
“They want to impeach me over acts that they did”
“Dems have no achomlishments [sic]”https://t.co/WUGczy4y2c pic.twitter.com/ealXzJEFJM

Other notes that were visible in the photo include:

Trump echoed his belief that Democrats have a lack of accomplishments on Thursday morning, tweeting that they are “getting nothing done in Congress,” later adding that the party had “become known as THE DO NOTHING PARTY.”

The misspelling of “accomplishments” in the handwritten notes obviously caught the eye of people online, who mocked Trump’s notes.

Trump spelled the word “accomplishments” as ACHOMLISHMENTS in his own handwritten notes for today’s #TrumpTantrum in the Rose Garden. He has the best brain. And the best words. pic.twitter.com/b1IeW70tFL

Trump’s notes from the Rose Garden presser. The number one thing we should be concerned about, the man doesn’t even know how to spell accomplishments. #maddow #inners #lastword pic.twitter.com/BkYJtuLe5B

Y’all, I know it isn’t nice, but I can’t help but marvel that the President of the goddamned United States spelled it “Achomlishments” in his notes. https://t.co/3Xh0ZO2DMd

Even when I'm drunk, I can spell "accomplishments" https://t.co/GiBnEqQW24

The next presidential debate should just be a spelling bee. #achomlishments

A whole new take on ‘I have the best words’. #achomlishments

Every time Trump misspells something on Twitter, it inevitably becomes a joke—and a mistake on a handwritten note was no different.