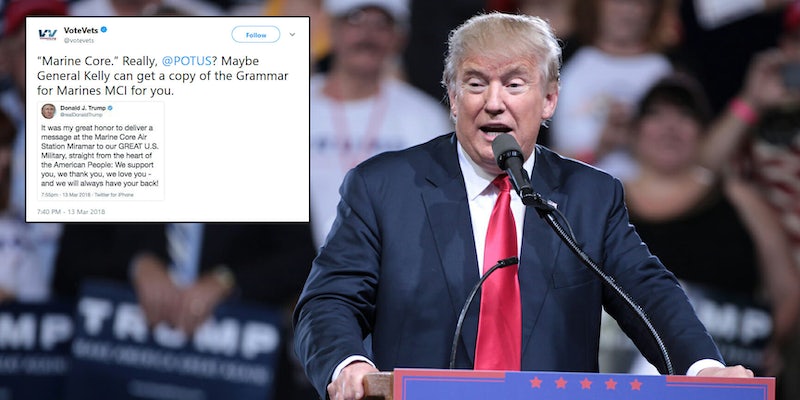 Trump mocked mercilessly for misspelling ‘Marine Corps’ in a tweet

Veterans in particular seemed to take offense to Trump's misspelling.

Trump, who deleted the misspelling and replaced it with the proper name, shared a picture of him speaking at the Marine Corps Air Station in Miramar, California.

It was my great honor to deliver a message at the Marine Corps Air Station Miramar to our GREAT U.S. Military, straight from the heart of the American People: We support you, we thank you, we love you – and we will always have your back! pic.twitter.com/oCt1nH3DON

This is certainly not the first time Trump has made a typo in a tweet. There was of course “covfefe,” a mistake that became the name of a bill, and in December 2016, the president typed “unpresidented,” a misspelling of “unprecedented” that became the genesis for a flurry of memes and jokes.

But the internet took notice of the “core” mistake, bringing up his Vietnam War deferments, among other things.

Maybe start to have their backs by learning to spell "Marine Corps" correctly. https://t.co/OCiDW2htPk

People are mocking Trump for misspelling "Marine Corps" as "Marine Core," but to be fair, since he dodged the draft to avoid serving, he'd never have learned how to spell it. https://t.co/8riMAZBXkz

Veterans, in particular, appeared to take offense to Trump’s “core” mistake, as HuffPost points out.

“Marine Core.” Really, @POTUS? Maybe General Kelly can get a copy of the Grammar for Marines MCI for you. pic.twitter.com/VjEYvVD6w1

Someone had to explain to Cadet Bone Spurs the difference between the Marine Corps & the "Marine Core".
Take it from a veteran, our military deserves better than a lying, malignant narcissist for a commander in chief.
Resign! pic.twitter.com/jMIFP0fXP8

Meanwhile, Trump loves the armed forces so much, he’s thinking about putting Rick Perry in charge of vets.