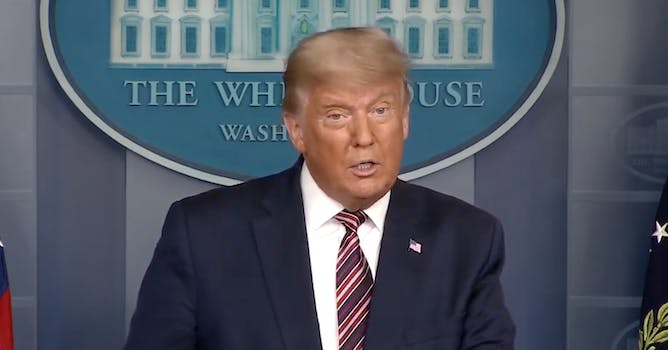 His heart didn't seem in it.

President Donald Trump came out to the White House Press Briefing Room Thursday evening to half-heartedly declare a half-victory saying: “If you count the legal votes, I easily win.”

That does not appear to be the case. For someone who ostensibly came out to give a victory speech, he spent the rest of his time criticizing the states where it appears he’s going to lose, with a rambling set of accusations, conspiracies, and baseless claims about the votes in those states.

The premise of the press conference was that he will be challenging results in court which, if things don’t change, will almost certainly give former Vice President Joe Biden a victory in the Electoral College.

While it’s not worth detailing any of the nonsense, and indeed even MSNBC cut away from him, what struck everyone was that it sounded like he didn’t care, and was utterly defeated.

Everyone online called it the lowest intensity coup they’ve ever seen.

Prominent writers and reporters even joked it was a low-energy coup.

For someone who constantly called his opponent “Sleepy Joe,” Trump really didn’t bring the alertness to his biggest moment on the stage.