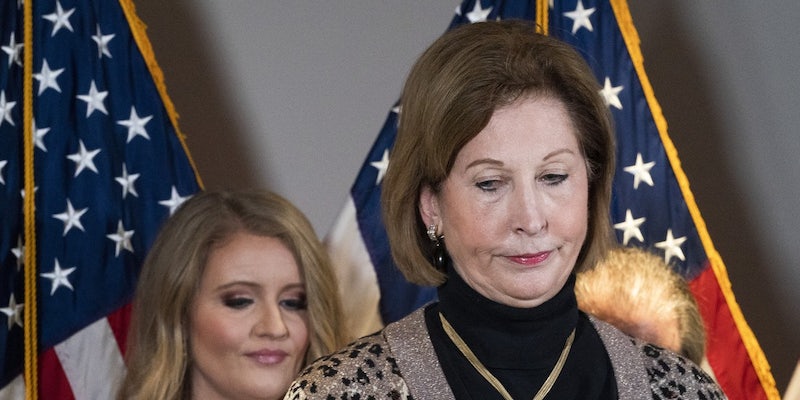 Sidney Powell filed an affidavit from a prominent QAnon figure.

In President Donald Trump’s increasingly desperate and futile effort to overturn the election, an attorney has turned to the longtime administrator of 8kun, home of the QAnon conspiracy theory.

The Washington Post reports that attorney Sidney Powell, whom the campaign recently officially disavowed, even as she continues litigating cases supporting its cause, filed an affidavit from Ron Watkins on Tuesday. Powell has also represented Michael Flynn, who is a hero in QAnon circles.

Watkins’ father Jim owns 8kun, where the alleged government insider Q posts clues to the conspiracy theory that holds that a global cabal of Satanist pedophiles rules the world and Trump is secretly fighting to take them down. Ron Watkins was until recently the administrator of the site, which is a notorious haven for far-right extremists and conspiracy theorists.

Many have speculated that one or both Watkins either is Q or writes some of the posts, which both have denied.

The younger Watkins claims he left 8kun on Nov. 3. His departure coincided with a lengthy silence from Q.

In the month since, Watkins has been on a quest to prove Trump’s unfounded claims of election fraud, frequently tweeting outlandish claims about Dominion Voting Systems, which has been the subject of Trump’s and his allies’ efforts to change election results.

No one has presented any evidence that the claims are true, and Dominion has fiercely denied any wrongdoing. On Tuesday, Attorney General William Barr himself conceded there was no evidence that supported nullifying the election.

The claims in Watkins’ affidavit, filed in Powell’s Georgia case, simply amount to him reading Dominion’s online user guide and concluding that it’s “within the realm of possibility” to fraudulently change votes, the Post reports. Even if true, which is highly debatable, Georgia has completed a hand recount that validated the election results.

Trump and his allies’ unsubstantiated election fraud claims includes a nonsensical belief that deceased Venezuelan dictator Hugo Chavez is behind Dominion’s algorithm. Nevertheless, the claims have led to real-world consequences. In a statement posted on its website last week, Dominion said that employees have been stalked, harassed, and received death threats.

Late Tuesday, Watkins tweeted an undated video of a Dominion employee in Georgia downloading data from an electronic voting machine onto a thumb drive, which he then plugged into a laptop. He claimed this was a “smoking gun.”

The video doesn’t show anything that could be construed as election fraud. That hasn’t stopped QAnon faithful from attacking the man believed to be the employee in the video. He’s been doxed and threatened with execution.

The escalation in violent rhetoric led Gabriel Sterling, a top official with Georgia’s Secretary of State, to lambast Trump and other Republicans for their complicity in a Tuesday press conference. Sterling said the video merely showed the employee transferring a report to a county computer, the Post reports.

“It’s all gone too far. All of it,” Sterling said. “This 20-year-old contractor for a voting system company [was] just trying to do this job.

“His family is getting harassed now. There’s a noose out there with his name on it. And it’s not right. … This kid took a job. He just took a job, and it’s just wrong.”