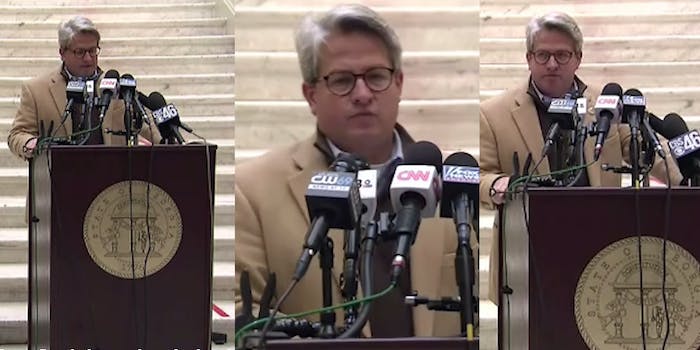 ‘It has to stop’: Georgia election official goes viral after blasting Trump for damaging democracy

'If you're going to take a position of leadership, show some.'

Gabriel Sterling, Georgia’s voting system implementation manager, criticized the president’s continued refusal to concede the election in a striking news conference. It has been nearly a month since Trump lost the 2020 presidential election to Joe Biden, but the current president has yet to acknowledge the results. He and many of his allies and supporters, continue to cry foul, soiling confidence in the electoral process and damaging the framework of American democracy.

Sterling addressed this prevailing issue in a press conference at the state Capitol. And now a 1-minute clip of his speech has gone viral, racking up thousands of upvotes on Reddit overnight. Trump has made repeated claims of voter fraud in Georgia, a state that he lost to Biden late in the race. Numerous lawsuits seek to overturn the election results. His claims of fraud and corruption have stirred much of his base into a frenzy, leading to heightened tension around the nation.

Sterling addressed the issues that have arisen due to Trump’s accusations of voter fraud in his Dec. 1 conference. “It has all gone too far,” he stated. “All of it. Joe diGenova today asked for Chris Krebs, a patriot who ran CISA [Cybersecurity and Infrastructure Security Agency] to be shot.”

diGenova is an attorney for Trump’s reelection campaign. The statements Sterling referenced occurred during diGenova’s appearance on the Howie Carr Show on Nov. 30. During the interview, diGenova called Krebs, the former head of CISA, a “class-A moron” and called for him to be “drawn and quartered. Taken out at dawn and shot.”

Sterling went on to list other examples of violent threats that have been levied against high-ranking officials in the wake of the president’s claims of fraud. “A 20-something tech in Gwinnett County today has death threats and a noose put out, saying he should be hung for treason because he was transferring a report on batches from an EMS [election management system] to a county computer so he could read it,” he said, emotion clear in his voice. “It has to stop.”

In the second half of the video, Sterling addressed the president and congress directly. “Mr. President, you have not condemned these actions or this language. Senators, you have not condemned this language or these actions. This has to stop,” he said, paternal rebuke dripping from every word. “We need you to step up, and if you’re going to take a position of leadership, show some.”

Near the end of his remarks, Sterling asked the president to “stop inspiring people to commit potential acts of violence.”