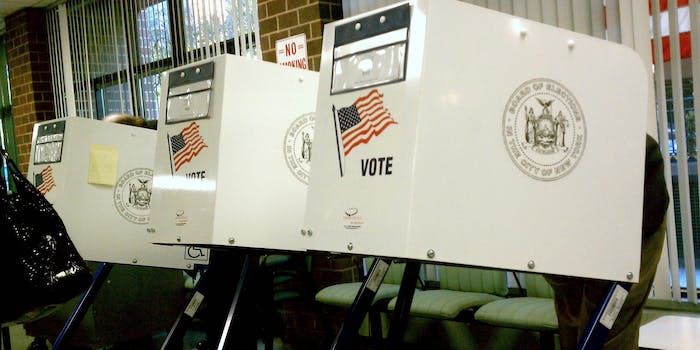 Trump is attacking Dominion for voter fraud but ignoring its larger competitor. Why?

Nearly half the country votes on ES&S machines, but Trump's lawyers haven't brought it up once.

Trump and his surrogates have laid much of the blame for their fictitious claims of voter fraud at Dominion’s feet, while ignoring a more obvious target: Election Systems & Software (ES&S), the nation’s largest provider of electronic voting machines. An election security advocate argues that the company has escaped blame because of its deep ties to Republicans.

ES&S equipment has a well-documented history of irregularities and malfunctions, such as when thousands of votes seemingly disappeared in heavily Black districts in Georgia in 2018, an election in which voters also complained that the machines changed their votes for governor from Democrat Stacey Abrams to Republican Brian Kemp. Problems with that election were so serious that a federal judge later banned paperless voting in the state as a result.

Over the years, ES&S has been repeatedly in the news for things like quietly selling 14,000 machines with internet access while claiming on its website that none of its equipment is online, as NBC News reported earlier this year; erroneously claiming that the modems in those machines were sanctioned by the Election Assistance Commission, as Politico reported in August; suing candidates, its rivals, critics, and jurisdictions, the latter for canceling a contract or choosing a competitor, as ProPublica reported last year; and blaming user error for election mishaps, as it did in Georgia.

“ES&S believes strongly in the security, accuracy and reliability of our machines,” the company told ProPublica when asked about problems with Georgia’s 2018 election. “We’re committed to our role in democracy and protecting the right to vote.”

Last year, its own senior vice president of government relations said that, while it was in a “strong position” moving into the 2020 elections, its equipment should be tested more.

Since 2018, Georgia has switched from ES&S to Dominion, but nearly half of voters in America are still casting ballots on ES&S machines, including in Wisconsin and Michigan, two states where Trump fruitlessly contested results.

Trump’s legal team has nevertheless thus far focused its attention solely on Dominion. They’ve gone so far as to argue that Dominion’s election machines were manufactured at the direction of long-deceased Venezuelan dictator Hugo Chavez and contained secretly installed servers from Europe, none of which is remotely true.

So why hasn’t Trump and his army of odd attorneys targeted ES&S?

That’s the question raised by election security advocate and writer Jennifer Cohn. In a Twitter thread, Cohn argues that the conspicuous absence of ES&S from the election fraud claims of Trump and his representatives like Sidney Powell is “a tell” because “[n]o one whose goal is election integrity would ignore or gloss over concerns with ES&S.” Cohn, who writes for the New York Review of Books, asserts that the reason could simply be that they’re on the same team. ES&S has a well-documented history of close connections and donations to Republicans. She believes that Trump and his cohorts want to put Dominion out of business.

Cohn’s thread linked to numerous stories about problems with ES&S’s equipment, such as Bloomberg’s story about votes in heavily Democratic, majority-Black districts in Memphis, Tennessee disappearing from machines serviced and maintained by ES&S in 2015 and that time it accidentally exposed the records of 1.8 million voters in Chicago in 2017. And who could forget when voting machine passwords that appeared to belong to administrators with the North Carolina State Board of Elections leaked in 2019, as the Daily Kos reported?

She also points out that ES&S has taken election officials on vacations and donated heavily to Republicans like Sen. Mitch McConnell (R-Ky.), who received thousands from ES&S lobbyists before blocking election security bills in 2019, per Newsweek (Dominion’s lobbyists also donated). ES&S has at times been less-than-transparent about employing lobbyists and the campaign donations made by those lobbyists, as Philadelphia Inquirer reported last year. Its use of lobbyists was the subject of a New Yorker piece called “How voting-machine lobbyists undermine the democratic process.”

ES&S has consistently maintained that its systems are safe and that it has done nothing wrong in its business practices.

Trump’s hyper-focus on Dominion while ignoring ES&S is oddly incongruous with doing everything in his power to overturn the election. As Cohn and others have noted, he and his proxies seem intent on avoiding any mention of ES&S. Trump’s lawyers have gone so far as to blame Dominion for results in jurisdictions that use ES&S’s machines, such as Philadelphia.

Trump and his team act as if they’re committed to exhausting every available means of nullifying the election results, even if it means lying about abject reality, so it seems only logical that they’d point a finger in ES&S’s direction, particularly given the history of issues with its equipment and transparency. Cohn believes that the glaring omission reveals that Trump’s true aim has nothing to do with preserving election integrity and everything to do with a power grab.

“They clearly have decided to try to put Dominion out of business so that ES&S can control 70% of the market again,” she tweeted. “Their goal is [to] seize power, not [to] improve election integrity.”

Because while Trump has no chance of winning this election, working to empower the company that might be advantageous to Republican efforts in 2024 might not be the worst play.