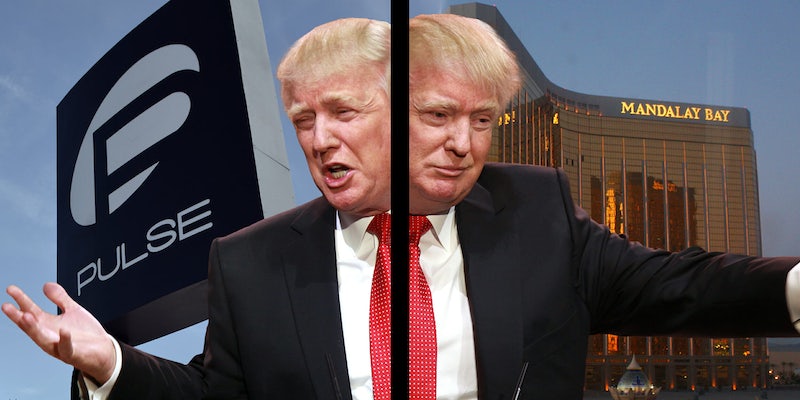 After one attack he pushed his policy agenda, after the other the White House stressed patience.

The White House says it’s not the “time or place” to talk gun control policy in the immediate aftermath of the shooting in Las Vegas. But President Donald Trump had no problem pushing his own policy agenda hours after the most recent comparable mass shooting in the United States last year—the shooting at the Pulse nightclub in Orlando.

As more information continued to be revealed about the shooting in Las Vegas—which left more than 50 people dead and more than 500 injured—Trump made a short, scripted, speech where he called on the nation to unite, adding that the attack was “pure evil.”

“In moments of tragedy and horror, America comes together as one—and it always has,” he said. “Our unity cannot be shattered by evil. Our bonds cannot be broken by violence. And though we feel such great anger at the senseless murder of our fellow citizens, it is our love that defines us today and always will forever.”

On the heels of Trump’s speech, White House Press Secretary Sarah Huckabee Sanders said it wasn’t the “time or place” to begin discussing gun control in the wake of the shooting, despite repeated calls from Democrats.

While Trump’s remarks on Monday may have sounded presidential, he was singing a much different tune in the immediate aftermath of the shooting at the Pulse nightclub in Orlando. In fact, he did the opposite of what his administration was pushing for on Monday: he immediately began talking about policy.

On June 12, 2016, mere hours after the Pulse shooting, Trump took to Twitter and boasted about being “right” about terrorism.

“Appreciate the congrats for being right on radical Islamic terrorism, I don’t want congrats, I want toughness & vigilance. We must be smart!” he wrote.

During a speech the day after the Orlando shooting, Trump used the massacre as a platform to push his “Muslim ban,” which would later morph into his travel ban, arguing that it would protect the nation from the “growing threat of terrorism inside of our borders.”

When speaking about the alleged Orlando shooter, Trump said his immigration policies could have prevented it.

“The bottom line is that the only reason the killer was in America in the first place, was because we allowed his family to come here,” he said. “We have to address these issues head-on. I called for a ban after San Bernardino and was met with great scorn and anger… We have to do it.”

“They know what’s going on. They know that [Mateen] was bad. They knew the people in San Bernardino were bad. But you know what, they didn’t turn them in. and we had death and destruction.”

Trump’s responses were completely different, but the attacks shared many similarities.

In Orlando, 49 people were killed and 58 people were injured when a lone gunman walked into Pulse and was considered the most deadly mass shooting attack in modern American history before Monday’s attack in Las Vegas.

In Las Vegas, 59 people were killed and more than 500 were wounded when a gunman opened fire on a crowd of people from the 32nd floor of the Mandalay Bay hotel.

When pressed about the discrepancy between Trump’s response to Orlando—where he aggressively pushed policy—and his administration’s response to Las Vegas, Sanders curtly responded that there was a “difference between being a candidate and being the president,” before quickly moving on.

The reason may be that. But there’s also the very real and observable possibility that atrocities in the name of terrorist organizations prompt action from Trump, whereas ones by white men receive shrugs.