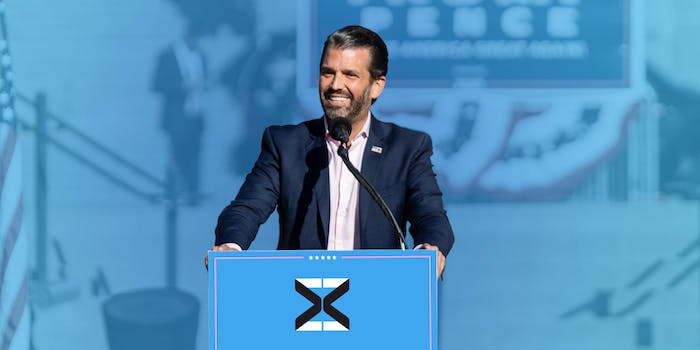 ‘I’m sure it will be just as successful as Truth Social’: Trump Jr. launches MxM, a news aggregator app

Expectations for MxM News are low.

On Tuesday, Axios reported that Trump and a handful of others who used to work for his father are launching MxM News. A spokesperson told the outlet that they hope to be similarly disruptive as the Drudge Report and Fox News were in their respective spaces after each launched.

“MxM News delivers curated news that cut through the censorship, mainstream bias, and institutional dominance that has left society divided and misinformed,” it says.

A small team is reportedly currently curating content. Rather than hire journalists or editors, they may eventually use artificial intelligence to recommend content to individual users—in other words, an algorithm.

MxM News (short for “minute by minute”) will initially focus on growing its user base, then look into making the app profitable. Trump Jr. reportedly initially received funds from friends and family. In coming months, MxM is planning a series A fundraiser, Axios reports. To raise the millions that come from a series A fundraiser, companies must reportedly establish likely future profits of $100 million to $1 billion.

News of MxM’s launch immediately drew comparisons to Truth Social. Former President Donald Trump’s somewhat anticipated social media platform struggled since launching over a month ago. If people manage to get through the Truth Social sign-up gauntlet and create an account, they complain about low engagement, censorship, and other issues.

Other amused reactions focused on their plans to raise funds or their goal of competing in the saturated news aggregator space.

A few felt it would actually be nice if Trump supporters were siloed into their own applications and social media platforms.

Most people just made fun of MxM News.

MxM News is available for both iPhone and Android.