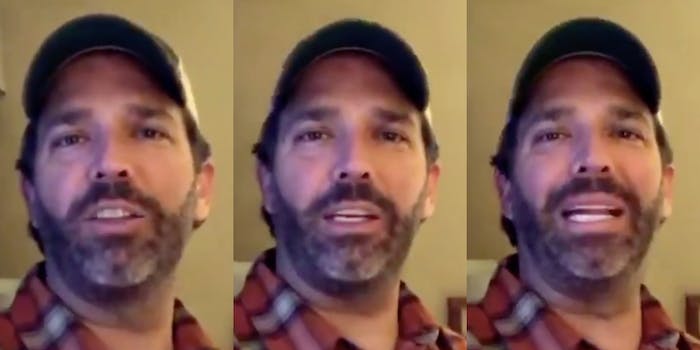 Trump Jr. kept his streak going on Sunday, when he tweeted a video of himself delivering a slurred, paranoid rant about Hunter Biden’s alleged ties to China.

“Every major media outlet spent weeks and months trying to pretend that the Bidens weren’t tied to China, that there was no link there, that there was nothing shady at all about Hunter getting a billion dollar investment from the Chinese government,” Trump Jr. says in the video.

“I mean, this isn’t like he’s dealing with a Chinese businessman that happens to be an American, or an expat or something like that, but from the actual Chinese government. It was as though that was a conspiracy theory. It was as though that was a hoax. And now we see that, I guess, the U.S. marshals and people in Delaware are investigating Hunter Biden for tax fraud, and I imagine it’s amongst other things.”

The video appears to take place inside a dingy motel room, leading to plenty of Motel 6 jokes and more suspicions of possible drug use on Twitter. The president’s son even received a dragging from his ex-mistress, Aubrey O’Day.

O’Day originally rose to fame in the mid-2000s as a member of the girl group Danity Kane. The singer also appeared on Trump’s Celebrity Apprentice in 2011, where she met Trump Jr. According to Page Six, Trump Jr. began pursuing O’Day while she was on set, and the two dated from 2011 through March 2012, despite Trump Jr. being married to his wife Vanessa since 2005.

The illicit tryst is now firmly in the rearview, and O’Day seems to hardly recognize her former flame. On Sunday, she retweeted Trump Jr.’s incoherent rant with a simple message: “wtf.”

Another Twitter user questioned the wisdom of O’Day’s decision to date Trump Jr., asking, “Was he always like this?” and concluding, “I guess we all have lapses we regret.” O’Day quoted the tweet and assured her followers, “He wasn’t that. Trust me.”

As of yesterday, O’Day still couldn’t get Trump Jr.’s meltdowns out of her head. She quote tweeted another user who shared a video of Trump Jr. ranting and responded with a popular GIF of a child staring at the camera in confusion and a little bit of horror.