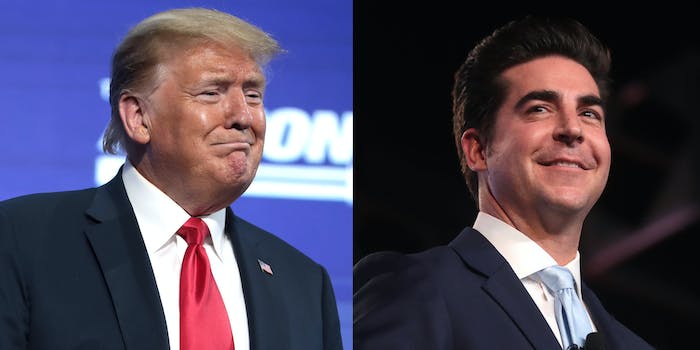 Trump's endorsement of the book was word for word what you could easily find on Amazon.

Former President Donald Trump has a long history of hyping up books written by people who share his beliefs. But his latest endorsement of a new book from Fox News’ Jesse Watters is gaining attention because it’s just a copy-and-paste job of the book’s promotional description.

Trump released a statement on Wednesday where he called Watters’ new book How I Saved The World “great.”

However, the next part of Trump’s statement might have sounded very familiar. It was an exact copy of the promotional material about the book like you would find on Amazon.

Specifically, the part he copied reads: “Interspersed are his thoughtful suggestions for overcoming left-wing radicalism, maintaining American democracy, moving beyond aging hippies (like his long-suffering, loving parents), saving the world from social justice warriors and the deep state—all while smirking his way through life in only the nicest way.”

The same description can also be found on Barnes & Noble’s website, and even on Harper Collins’ website, which is publishing Watters’ book.

The copy job was immediately noticed by people online, who cracked a lot of jokes about it.

“It would have been perfect if Trump’s statement had ended with ‘Jesse Watters lives with his wife, three children, and dog Coco in New York City,'” one Twitter user joked.

“Looks like Melania isn’t the only tRump who plagiarized,” another Twitter user chimed in, referencing when Melania Trump’s RNC speech in 2016 was extremely similar to a speech delivered by Michelle Obama in 2008.