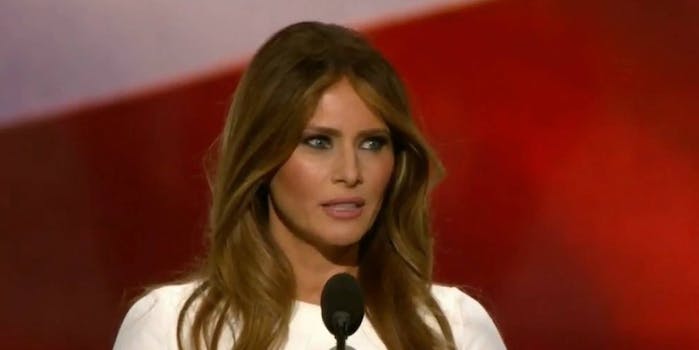 How could this have happened?

Amid fiery Monday night speeches from Republican luminaries like Rudy Giuliani and Iowa Sen. Joni Ernst, Melania Trump, wife of presumptive presidential nominee Donald Trump, gave a warm talk at the Republican National Convention showcasing her hope for the future without bashing the other side of the political aisle.

After about an hour of social media users and the cable TV analysts giving the speech high marks, Twitter user Jarrett Hill noticed one paragraph from Trump’s speech was lifted, nearly word-by-word, from a speech delivered by Michelle Obama during the 2008 Democratic National Convention.

I taught speech for ten years. Even my worst students would not have done this: https://t.co/QhPPC8ENUA pic.twitter.com/co5VveF5cq

Making matters worse, Trump told NBC’s Matt Lauer she had written most of it herself.

Twitter users shook their collective heads in disbelief, particularly since this was a part of the speech extolling the virtues hard work. There was also the question about how something like this could have happened.

Chris Matthews: "Somebody was gonna figure this out." He's claiming speechwriter who did this did it purposely to sabotage Trump. We'll see.

1. Speechwriter so incompetent to think wouldn't get caught, which is scary b/c quality of people surrounded by, or https://t.co/ZlY28TEAMY

2. They have a speechwriter who hates Trump so much it was in purpose, knowing would get caught. https://t.co/ZlY28TEAMY

Presumably, we’ll begin to find out answers on Tuesday, but late Monday night into early Tuesday morning, the Trump campaign had managed to turn what had been a singularly sweet moment into a sticky situation.