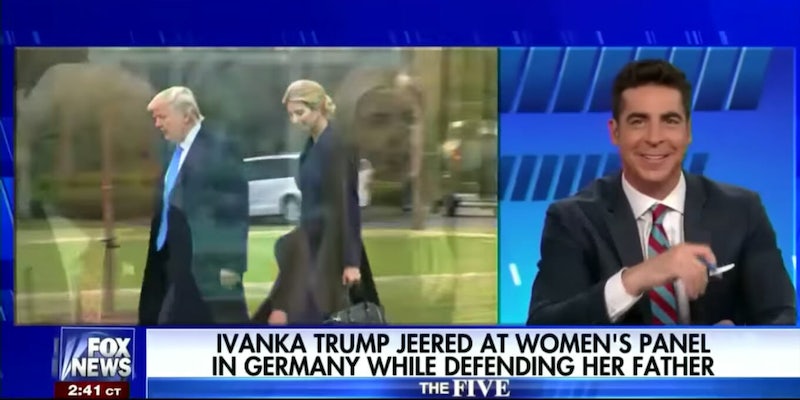 This isn't the first time the former 'O'Reilly Factor' star has made offensive comments.

Turns out Fox News has another controversy to deal with. Jesse Watters, the brand new co-host for Fox’s The Five, decided to make an inappropriate joke about Ivanka Trump in the middle of a news segment.

After playing a clip from the W20 summit in Germany in which the first daughter was booed by a crowd, Watters ended his commentary on her speech by saying he “really liked how she was speaking into that microphone.” Watters gave a quick grin to the camera before his fellow co-host, Kimberly Guilfoyle, moved the discussion away from the remark.

Watter’s pause and expression, along with the closeness with which Ivanka held the microphone to her mouth, made it clear to most of the internet that the Fox host was making an oral sex joke at Ivanka’s expense.

But Jessie Walters is a pic.twitter.com/mU24gPOc0b

In an official statement obtained by the Washington Post, Watters claims the joke wasn’t intended to suggest anything lewd about the first daughter.

“During the break, we were commenting on Ivanka’s voice and how it was low and steady and resonates like a smooth-jazz radio DJ,” Watters said. “This was in no way a joke about anything else.”

Watters is pretty familiar with controversy. During his segment “Watters’ World” for the O’Reilly Factor, Watters received major backlash for a segment taking place in New York City’s Chinatown that was deemed offensive for racist stereotyping against Chinese and Asian-Americans. In the excerpt, Watters asks about Chinese herbs for “performance” and jokes that “everything is made in China” to one woman.

The vile, racist behavior of Fox’s Jesse Watters in Chinatown has no place in our city. @FoxNews – keep this guy off TV.