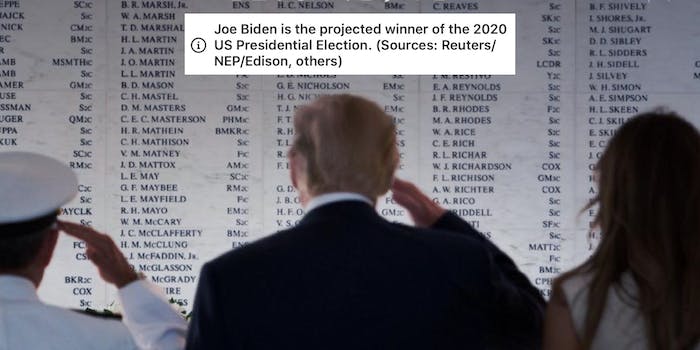 Trump supporters believe the president is being unfairly singled out, but there's more to the story.

Instagram temporarily placed a notice on a post made by President Donald Trump regarding Pearl Harbor Remembrance Day.

The post, made by the president’s account on Monday, featured a photograph of Trump saluting a wall filled with the names of victims of the 1941 attack.

Supporters of the president noticed soon after that the post contained what they believed to be a fact-checking label stating that “Joe Biden is the projected winner of the 2020 US Presidential Election.”

The incident led to a backlash among Trump supporters, who accused the platform of singling out the president for unwarranted scrutiny and blindly placing labels on his posts.

Not more than two hours later, the notice on Trump’s post was suddenly removed.

In a statement to the Daily Dot, an Instagram spokesperson said that the label was applied to Trump’s account automatically.

“As part of our work to keep our community informed around the elections, automated labels were applied to posts from all candidates,” the spokesperson said. “In this instance, this label was unintentionally applied, and thus has since been removed.

Instagram referenced the Daily Dot to a Nov. 5 statement where the social media site, which is owned by Facebook, announced that it would apply such labels to all posts from political candidates.

Instagram also pushed back on the claim that its notices were intended to fact-check the president.

“This was not a fact-check, but rather a notice to inform our community around election results,” the spokesperson said.

The controversy surrounding the post comes as Trump, who has refused to concede the election, falsely claims that widespread voter fraud cost him the race.