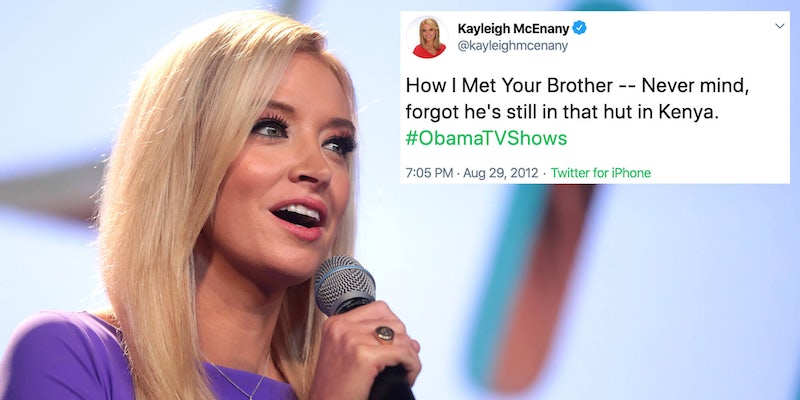 Kayleigh McEnany tweeted in 2012 about Obama's brother living in a 'hut in Kenya.'

Kayleigh McEnany, who is set to replace Stephanie Grisham as White House press secretary, has some bad old tweets.

McEnany is currently a spokesperson for President Donald Trump’s reelection campaign. Her upcoming role, first reported by CNN, is already raising eyebrows for her past comments.

In a 2012 tweet, McEnany made a disparaging remark about the brother of then U.S. President Barack Obama living in a “hut in Kenya.”

“How I Met Your Brother — Never mind, forgot he’s still in that hut in Kenya,” she tweeted.

The comment drew widespread criticism at the time and received a second influx of comments follow the election of Trump.

Now, with McEnany’s name back in the headlines, many Twitter users have revisited the comment to voice their disgust.

“Really despicable, racist remark,” @MerrittKelly1 said. “That tweet last month about coronavirus not coming to our shores didn’t age well, did it?”

While McEnany has not weighed in on recent criticism of the tweet, the Trump spokeswoman is arguably aware of the pushback given that the comment has received over 3,000 replies.

“Wow! A short comment that manages to be racist, conspiracist, and just plain old nasty,” @shannoncoulter added. “You’ll fit right into that administration.”

In perhaps one of her more damning claims, she professed to liking Sen. Ted Cruz (R-Texas).

And she somehow compared Benghazi to the line at Taco Bell.

According to the Wall Street Journal, McEnany will try to be a more conventional press secretary than her predecessor, Grisham, who didn’t hold a single briefing during her tenure.

The New York Times states that McEnany will also be tasked with defending the president on TV.

The transition will likely be seamless for McEnany, as she was already a staunch defender of the president on his favorite medium.

McEnany made headlines in February after claiming on Fox Business that Americans “will not see diseases like the coronavirus come here” due to the leadership of Trump.

“And isn’t that refreshing when contrasting it with the awful presidency of President Obama?” she said.