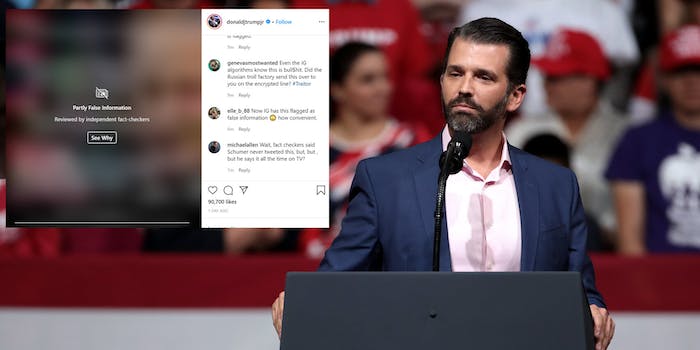 An Instagram post by Donald Trump Jr. about Senate Minority Leader Chuck Schumer (D-N.Y.) and other Democrats was deemed “partly false” by the social media giant and hidden on his profile.

The post from the president’s son was a meme about Schumer and Democrats, saying they were having a “meltdown” over a travel ban President Donald Trump instituted from China earlier this year, adding that the Senate minority leader said it was part of the president’s “war against immigrants,” among other things.

The third-party fact-checker that flagged Trump Jr.’s post, Lead Stories, found that the source of the claim seems to be from a fake story that Schumer deleted a tweet in early February calling the China travel ban a “war against immigrants.”

It also noted that ProPublica has been tracking deleted tweets from lawmakers, and that tweet in question was not in the archive.