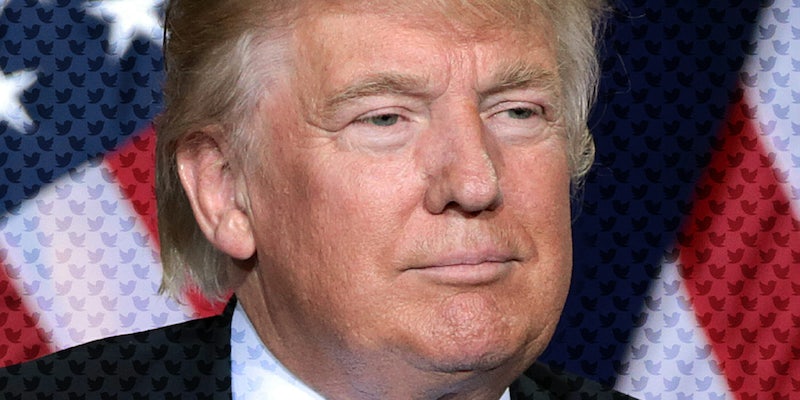 President Donald Trump and his administration have repeatedly bragged about the size of his following on social media, but Trump’s audience on Twitter—clearly his favorite method of communicating with the public—is inflated with even more fake or inactive accounts than previously believed.

Two different analyses shared with the Daily Dot show that more than a quarter of Trump’s Twitter following, as of early October, have never tweeted before—with one data set going further to show that nearly half of his following has been largely inactive on the social media platform, only tweeting five times or fewer. Data provided to the Daily Dot by SocialRank shows that more than 13 million “egg accounts,” users that have yet to set a profile photo and rarely tweet–a large indication of “bot” or fake followers–follow Trump, making approximately 33 percent of his following completely fake.

The data from a new project by Michael Cook of the team Trump or False largely backs up information dug up by SocialRank, a social media analytics firm. Cook compiled the data using an algorithm that pulls information about Trump’s followers. (Cook also helped create a game called Trump or False that tests players’ knowledge of the president’s false statements, thus the name.)

However, if that segment of the American people is actually made up of inactive, fake, or innocuous accounts, Trump clearly reaches a far smaller audience of the American public than a casual look at his follower count on Twitter would suggest.

A quarter of Trump’s followers have never tweeted

According to SocialRank, 25.5 percent—or 10.2 million Trump followers, as of Oct. 10—have yet to share any content on Twitter, and 18.9 million of his followers have not shared content in more than a year. Additionally, more than 300,000 accounts following @realDonaldTrump only follow his account. The Trump or False team found that 25.3 percent of Trump’s followers have not tweeted, as of Oct. 9.

Not only are Trump’s followers mostly inactive, but a staggering amount of accounts following the president were created after he announced his candidacy for president in June 2015, according to data compiled by Trump or False.

The analysis shows that 56.7 percent of Trump’s followers, as of Oct. 9, created their accounts after Trump announced he was running for president, and 37.7 percent of the accounts were created after he was elected in November 2016.

Trump has also seen small spikes in followers during tumultuous times in his presidency. Amid his much-criticized response to the violence stemming from a white supremacy rally in Charlottesville, Virginia, in August, Trump’s followers jumped from 35.3 million on Aug. 8 to 36.2 million on Aug. 18, a few days after receiving vehement criticism for his response. He also jumped from 29.6 million followers between May 17, the day Deputy Attorney General Rod Rosenstein appointed former FBI Director Robert Mueller as special counsel to lead the Justice Department’s Russia probe, to 30.4 million one week later.

Trump is obviously a high-profile account on Twitter that often ends up on lists of “who to follow” for both new users of the social media platform and active users. It stands to reason that some portion of his following–particularly after he announced his candidacy and after the election–would have created accounts to follow the numerous updates he posts daily.

Trump’s following also includes 13.7 million “egg accounts,” or inactive accounts with no profile pictures—a clear indication of a bot, or fake follower, Kharly Stauber, SocialRank’s head of content and accounts, told the Daily Dot. The number of these kinds of accounts following him has increased by 2.2 million over the past two months. This summer, SocialRank found that only 11.1 million people following Trump as of September were active.

Stripped away of the egg accounts, Trump is left with roughly 27.5 million followers, a far cry from the 41.1 million he boasted as of Tuesday evening. When you factor in the number of accounts that have not tweeted in the past year—18.9 million, according to SocialRank—and the 27.1 million accounts that have not shared content in the past 90 days, the number of active and engaged followers of @realDonaldTrump plummets considerably.

Both Social Rank and Trump or False compiled their data as of early October.

The mystery of Trump’s fake followers

It’s not clear why Trump’s Twitter following is bolstered by such an extreme amount of fake or inactive accounts. While it’s possible that people signed up for Twitter to follow the president but quickly lost interest, the sheer number of fake accounts has Michael Cook, who compiled the Trump or False data, speculating that accounts are being intentionally created to increase the president’s social media presence.

“The goal was always to allow people to make their own inferences from our data, and we would just keep it as factual as possible on our end,” Cook told the Daily Dot in a Twitter direct message. “But I think it is important for them to be able to visualize just how many of his followers (which is growing quite rapidly), are actually accounts with little to no activity, and are being mass created daily with what seems like the sole purpose of artificially bolstering his follower count.”

Twitter has strict rules against accounts buying or artificially inflating the number of followers, retweets or other actions to create “fake engagement.” Twitter did not respond to a request for comment by the Daily Dot about the company’s rules for someone else encouraging fake engagements or followers for a separate account or specifically about increases in sign-ups around Trump’s candidacy announcement or election.

While it’s unclear why so many of Trump’s followers are fake or inactive, it is clear that claims of him being able to speak to large swaths of the American public through his Twitter profile are incorrect, judging by just how exaggerated his following on the social media platform really is.