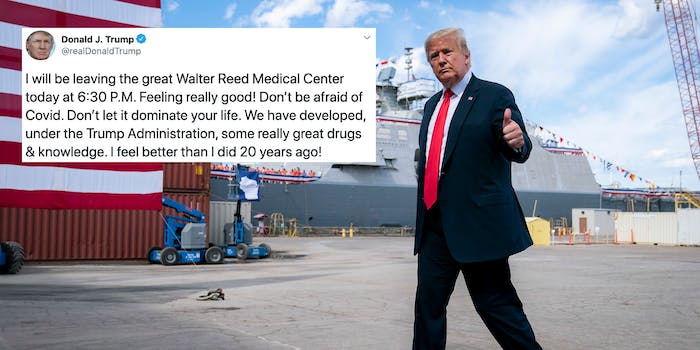 'Donald J. Trump feels better today than in the year 2000 because he's high on so many drugs.'

President Donald Trump asserted in a tweet on Monday afternoon that being stricken with the coronavirus has made him feel 20 years younger.

The president, who was hospitalized on Friday after experiencing numerous complications related to the disease, is reassuring his followers that he is now stronger than ever.

“I will be leaving the great Walter Reed Medical Center today at 6:30 P.M. Feeling really good!” Trump said. “Don’t be afraid of Covid. Don’t let it dominate your life. We have developed, under the Trump Administration, some really great drugs & knowledge. I feel better than I did 20 years ago!”

Trump thus far has received a cocktail of drugs as part of his experimental treatment, including the steroid dexamethasone. Numerous health professionals have noted that the drugs being taken by the president suggest that his situation is more serious than the White House has let on.

But Trump, who even chose to take a short armored SUV ride outside the hospital in a transparent effort to project strength, has done everything possible to convince the public that he is the embodiment of health.

A series of tweets this morning, nearly all of which utilized caps-lock, eventually led many to accuse Trump of experiencing “roid rage.” Now users are noting that Trump’s bizarre tirade may just be the result of him being high on medication.

“Donald J. Trump feels better today than in the year 2000 because he’s high on so many drugs,” @thecultureofme wrote.

While the president’s current mental state is unclear, a doctor speaking with CNN recently noted that side-effects from the steroid treatment include psychosis, delirium, and mania.

Twitter users were quick to attribute Trump’s behavior to his drug regimen.

Others tweeted out the laundry-list of substances that Trump is currently taking as part of his treatment.

“All you need is this and you’ll be fine,” @ed_solomon said.

“You’re on steroids you idiot. You think you can bike the tour de france, but you wouldn’t make it a block,” @NancyLeeGrahn added. “How dare you tell ppl not to be afraid of a disease that killed 230k ppl on your watch. I’m glad you’re being released. You won’t be once they lock you in a cell. Can’t wait.”

Despite the president still very much not being in the clear, his supporters are totally convinced that he has defeated the virus already.

“He’s back and stronger than ever,” @MichaelCoudrey said.

As noted in his initial tweet, Trump is scheduled to return to the White House at 6:30ET today.