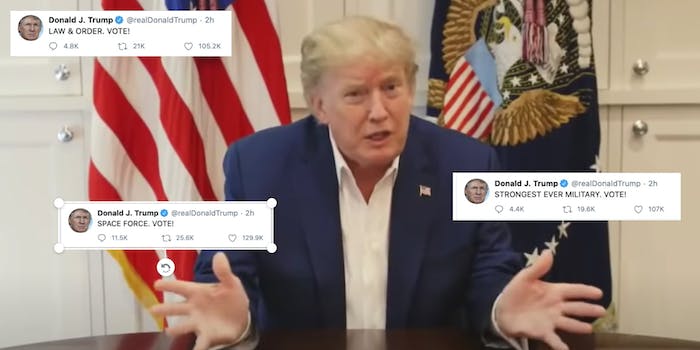 It's a lot of tweets.

Meanwhile, after being diagnosed with COVID-19, one of Trump’s physicians, Dr. Brian Garibaldi, said Trump is being treated with the steroid dexamethasone as of Sunday. Irritability, aggression, mood changes, and other personality-altering side effects are known symptoms of the drug, according to the Mayo Clinic.

Some Twitter users think the treatment is at fault for this morning’s tweets.

“I think he’s recovering,” one person tweeted with a screenshot of Trump’s Twitter tirade.

Trump tweeted eighteen times early this morning. The majority of tweets were in all caps encouraging followers to “VOTE!”

“Oh so this is what a roid rage episode looks like on Twitter,” journalist Joshua Topolsky tweeted.

“I DO NOT HAVE ANY FUCKING ROID RAGE!!! I AM PERFECTLY FUCKING CALM RIGHT NOW, SO STOP ACCUSING ME OR I WILL GIVE YOU COVID, GOT IT!?! AAAAARRRRGGGHHHH!!!!!!!!!!!” a Donald Trump parody account posted.

“The last time I took steroids was in March for Covid. I ripped a t-shirt off of my body from the neck down because the material was scratchy and irritating my skin. Here are Trump’s tweets from the last hour and it’s clear he’s got that ROID RAGE,” another person added.

Dr. Rochelle Walensky, chief of infectious diseases at Massachusetts General Hospital, told CNN that dexamethasone is only given to severely ill patients.

Trump’s doctors have maintained that the president is in stable condition.