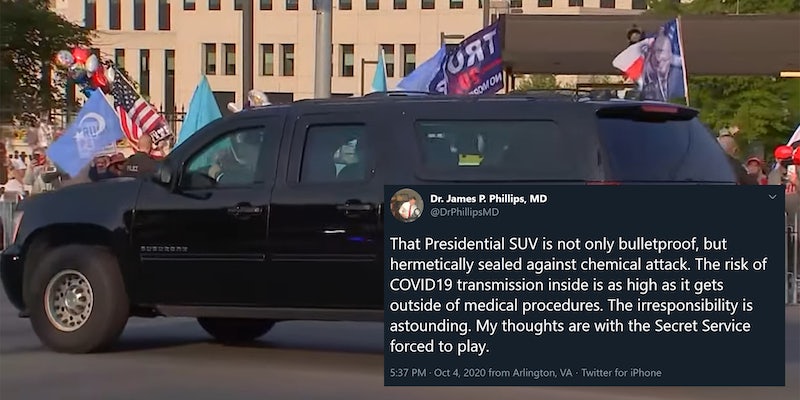 'They might get sick. They may die. For political theater.'

President Donald Trump’s decision to leave his room at Walter Reed National Military Medical Center to drive past a group of supporters on Sunday drew criticism from medical experts, including one Walter Reed attending physician who called the stunt “insanity.”

Dr. James Phillips, who also serves as chief of disaster medicine at the George Washington University Department of Emergency Medicine, slammed the president for endangering the people who accompanied him in his motorcade in a series of viral tweets.

“Every single person in the vehicle during that completely unnecessary Presidential ‘drive-by’ just now has to be quarantined for 14 days,” Phillips wrote. “They might get sick. They may die. For political theater. Commanded by Trump to put their lives at risk for theater. This is insanity.”

A lot of people apparently agreed with Phillips, as his tweet has received over 360,000 likes and 130,000 retweets.

“That Presidential SUV is not only bulletproof, but hermetically sealed against chemical attack,” the doctor wrote in an almost equally popular follow-up tweet. “The risk of COVID19 transmission inside is as high as it gets outside of medical procedures. The irresponsibility is astounding. My thoughts are with the Secret Service forced to play.”

The Secret Service agents in the motorcade appeared to take the threat of infection more seriously than Trump, as they could be seen wearing N95 masks and PPE in photos shared by CNN’s Shimon Prokupecz. Trump wore a cloth face mask.