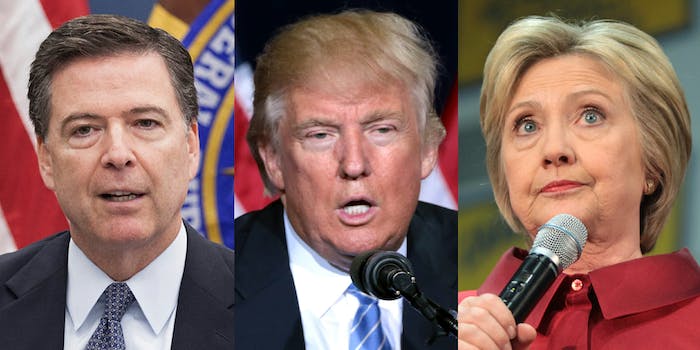 President Donald Trump on Wednesday morning accused former FBI Director James Comey of “exonerating” Hillary Clinton before investigators concluded their probe into her use of a private email system for State Department work.

“Wow, FBI confirms report that James Comey drafted letter exonerating Crooked Hillary Clinton long before investigation was complete,” Trump tweeted. “Many people not interviewed, including Clinton herself. Comey stated under oath that he didn’t do this-obviously a fix? Where is Justice Dept?”

In a later tweet, Trump said “James Comey lied and leaked and totally protected Hillary Clinton. He was the best thing that ever happened to her!”

…people not interviewed, including Clinton herself. Comey stated under oath that he didn't do this-obviously a fix? Where is Justice Dept?

As it has turned out, James Comey lied and leaked and totally protected Hillary Clinton. He was the best thing that ever happened to her!

Trump’s reignited feud with Comey, whom he fired in May, follows the Federal Bureau of Investigation publishing new records to its Freedom of Information site “The Vault” regarding the case against former Secretary of State Clinton, Trump’s 2016 Democratic rival. The documents, many heavily redacted, include one five-page set entitled “Drafts of Director Comeys July 5, 2016 Statement Regarding Email Server Investigation Part 01 of 01,” to which Trump is likely referring in his tweets.

Among these documents is a May 2, 2016, email from Comey to FBI Deputy Director Andrew McCabe, General Counsel James Baker, and Chief of Staff and Senior Counselor James Rybicki. The title of the email is “Midyear Exam.” The body of the email, which is marked “unclassified,” is entirely redacted.

Another document is a May 16, 2016, response from Rybicki to several colleagues, including McCabe and Baker. It reads, “Please send me any comments on this statement so we may roll into a master doc for discussion with the Director at a future date. Thanks, Jim.”

At issue is the timing of these emails, which came months before the FBI interviewed Clinton and several other witnesses. Clinton’s interview with the FBI, which her campaign said lasted three and a half hours, occurred on July 2, 2016, two months after Comey’s “Midterm Exam” email. However, Clinton said at the time, “I’ve been answering questions for over a year” by the time the interview took place.

Three days after the Clinton interview, Comey controversially announced that investigators found no criminal wrongdoing regarding Clinton’s use of private email as secretary of state but characterized her conduct as “extremely careless.”

Trump’s accusation that Comey “stated under oath that he didn’t” exonerate Clinton ahead of the investigation’s conclusion is an apparent reference to his testimony before the Senate Judiciary Committee earlier this year during which he defended his decision not to recommend charges against Clinton.

Although it remains unknown whether Comey’s May 2016 statement reflected the contents of his July 5, 2016, announcement, the documents lend credence to concerns expressed by Sen. Chuck Grassley (R-Iowa), chairman of the Senate Judiciary Committee, and committee member Sen. Lindsey Graham (R-S.C.). The lawmakers sent a letter on Aug. 30 to newly confirmed FBI Director Christopher Wray in which they said transcripts of interviews with members of Comey’s team appeared to indicate that Comey had “exonerated” Clinton prior to the conclusion of the email investigation.

“According to the unredacted portions of the transcripts, it appears that in April or early May of 2016, Mr. [Comey] had already decided he would issue a statement exonerating Secretary Clinton,” they wrote. “That was long before FBI agents finished their work.” (Emphasis theirs.)

Trump’s latest attacks on Comey come amid an ongoing investigation by Robert Mueller, the Justice Department special counsel, into Russia‘s attempts to meddle in the 2016 election, which includes investigating possible obstruction of justice by Trump for his sudden firing of Comey.