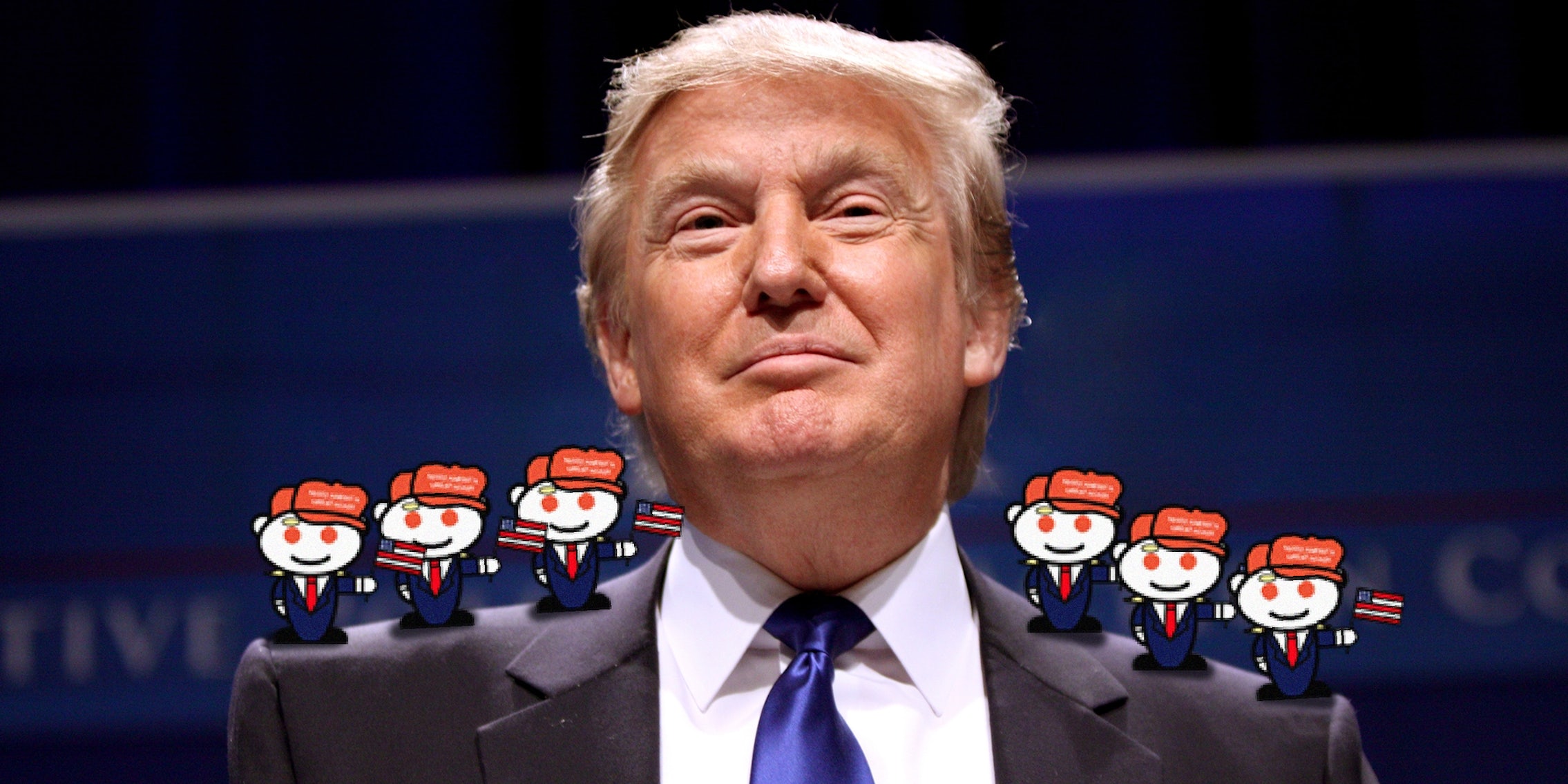 Who won the first presidential debate? It depends on who trolled the polls.

You may be getting trolled right now without even knowing it.

The efforts originated from users of the pro-Trump Reddit community r/The_Donald and 4chan messaged boards, which bombarded around 70 polls, including those launched by Time, Fortune, and CNBC.

Who do you feel had the best #debatenight tonight?

4chan, the notorious message board, has a long history of botting online competitions. In 2009, users flooded the Time 100 poll to ensure that the site’s founder, Christopher “moot” Poole, made the cut. In 2012, the pranksters employed JavaScript to vote for North Korean leader Kim Jong-un in Time’s annual Person of the Year poll and followed suit the next year with Miley Cyrus and Edward Snowden. 4chan also ensured a school for the deaf won a Taylor Swift concert. Likewise, a Twitter prankster helped send Pitbull to Kodiak, Alaska, as part of an online challenge by Walmart in 2012.

These types of efforts aren’t always successful, but given the tight turn of online polls during debates, they’re highly susceptible to such pranks.

In this latest incarnation, multiple Reddit users enlisted the Trump-supporting masses on r/The_Donald, which has over 200,000 subscribers, by posting dozens of online polls that are vulnerable to vote brigading, bots, and other forms of manipulation that make these non-scientific surveys notoriously unreliable. 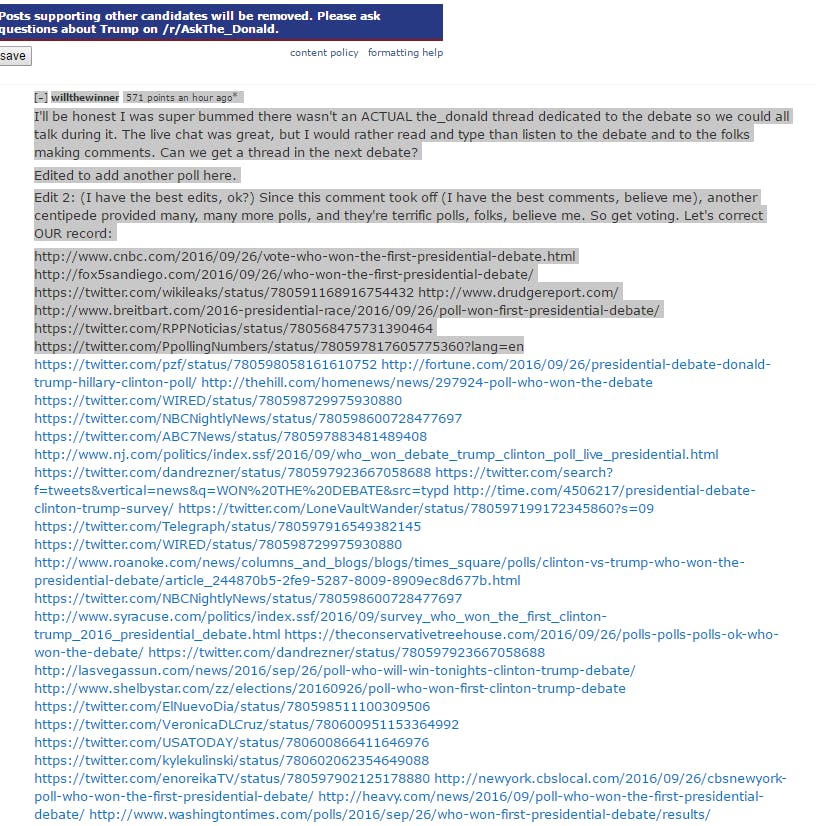 On 4chan‘s /pol/ board, users similarly shared links to active polls along with instructions for how to maximize their impact on the results. 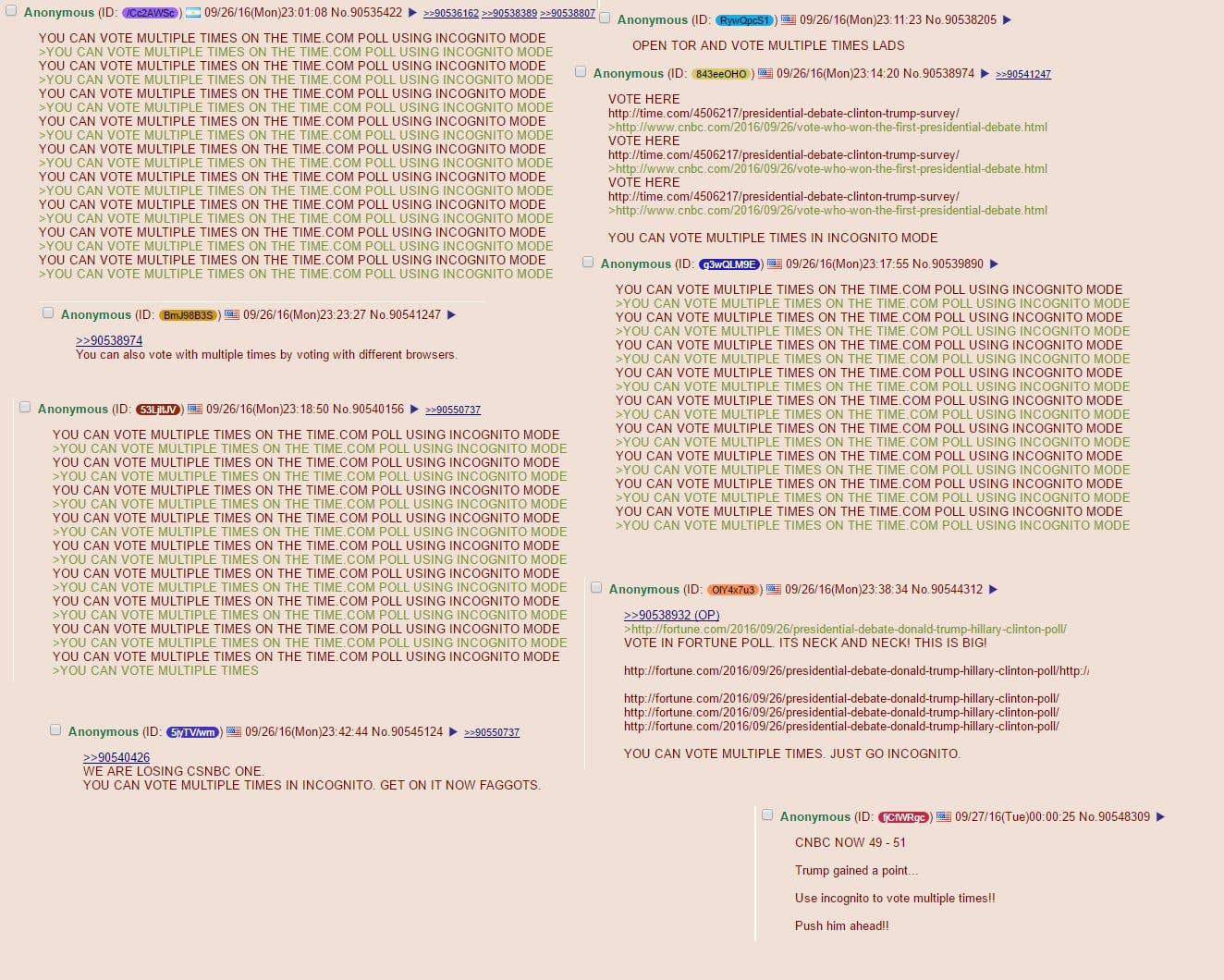 Screenshot of relevant thread by @LikwidE

The goal, according to comments surrounding the poll-manipulation threads, is to twist the mainstream media narrative that crowned Democratic nominee Hillary Clinton the victor. The effort spread to Twitter, where #TrumpWon became the number one trending topic in the United States Tuesday morning.

Polls that were not open to public voting consistently put Clinton ahead of Trump. In a flash poll by Public Policy Polling, Clinton led Trump 51 to 40. A CNN/ORC poll conducted immediately following the debate found significantly stronger support for Clinton, who topped Trump 62 to 27.

While screwing with online polls will likely have little effect on the overall results of the election, which is currently in a dead heat between Trump and Clinton, the activities of Trump’s supporters foreshadow the tactics we may see come election night—especially if Trump falls behind.