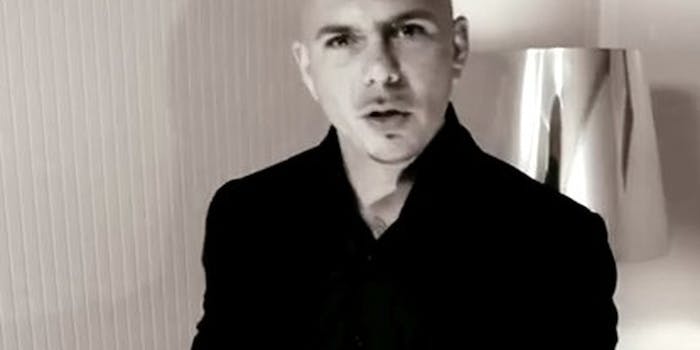 Pitbull sent to Alaska, along with Twitter user who pranked him

The Internet prankster behind the plan to "exile" rapper Pitbull to Alaska has been invited along on the trip... and he's actually going.

In a YouTube video released this afternoon, rapper Pitbull announced that he is indeed headed to Kodiak, Alaska.

Not on vacation, mind you, but as a marketing ploy to drum up excitement for Sheets–small strips of energy that melt in your mouth and are sold at Wal-Mart stores. Sheets and Wal-Mart teamed up to send the International Lover to whichever Wal-Mart store received the most “Likes” on Facebook.

It didn’t take long for David Thorpe (known as @Arr on Twitter) to catch wind of the contest decided to #exilePitbull (#hashtag his) to Kodiak, Alaska’s humble Wal-Mart. With help from a crew of “goons” from the long-running humor site Something Awful, where Thorpe is a columnist, Kodiak, Alaska’s Facebook page ballooned to over 70,000 fans and was announced this morning as the contest’s winner.

“You voted with your ‘Like’ and now Pitbull is coming to Kodiak. We can’t wait,” wrote Kodiak’s Wal-Mart on Facebook, to which commenters mostly responded with mocking cheers.

In the video announcing Kodiak’s win, Pitbull seems slightly annoyed that a Twitter prank decided the outcome—even calling out Thorpe by snidely inviting him along to Kodiak. “What you have to understand is that I will go anywhere in the world for my fans… I want to invite that someone who thinks it’s a joke to Kodiak, Alaska with me,” he said.

This wasn’t the first time Mr. Worldwide had reached out to Thorpe, previously tweeting, “@Arr U should come with me to Kodiak since ur are so invested in me going there bro…ur welcome 2. #exilepitbul l#keeppitbull305 ;)”

BuzzFeed spoke with Thorpe via Twitter Direct Message, and he confirmed that he’s been speaking with Wal-Mart and Sheets to ‘claim’ his free trip. But, much like Pitbull, he doesn’t seem completely excited about it, tweeting: “Is anyone else detecting a vague undercurrent of menace in the Pitbull video? I am almost definitely getting killed in Kodiak.”

Forget the wildlife, it’s not just Pitbull who should be worried about not making it back from Kodiak. We’ll be praying for you, @Arr.