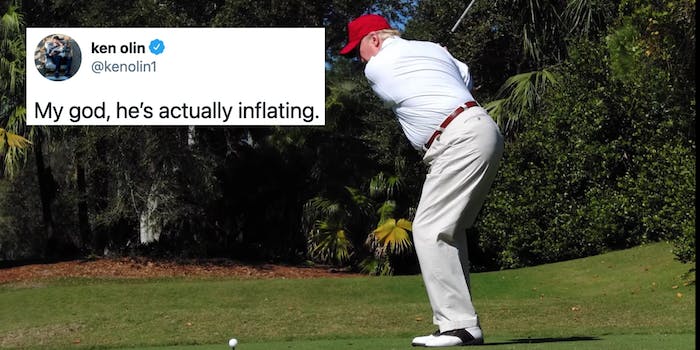 The picture was Photoshopped to make the president appear heavier.

Twitter users are body-shaming President Donald Trump based on a photograph that happens to be fake.

A popular Twitter user shared the picture on Monday and suggested that the president was gaining weight and “actually inflating.”

The picture has already received more than 5,000 retweets, with those opposed to Trump mocking his appearance.

“Trump can now be mistaken for the Trump balloon,” one user said.

As it turns out, though, not only is the picture Photoshopped, but it isn’t even a recent picture.

As reported by Snopes, although the president spent the weekend golfing, the image is actually based off of a photograph from June 28.

The original picture, taken by Nicholas Kamm of the AFP, does show Trump returning to the White House after golfing at the Trump National Golf Club in Virginia. Trump’s neck and stomach, however, are visibly smaller.

“I don’t like the guy but body shaming? And photoshop?” @JennMacA said. “Can we not just criticize and shame him for all the shit he’s done?”

Twitter users also criticized Ken Olin, the Twitter user who shared the photograph, for spreading false information while also having the phrase “facts are facts” in his profile bio.

Even those opposed to the president pushed back on the tweet, arguing that shaming Trump was not only counterproductive but hurtful to others.

“What type of person doctors a photo just to fat-shame someone they despise?” @HikindDov said. “Utterly pathetic.”

Despite the photo being thoroughly debunked, Olin has left the original tweet up and even re-shared the photo.

“Instead of a library they should build him a gym,” Olin said.