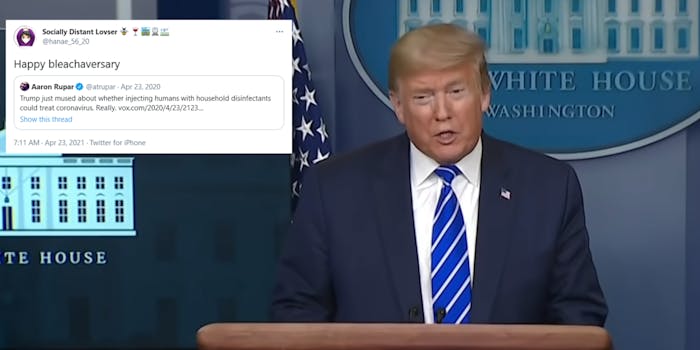 Twitter users are marking the anniversary with memes and mockery.

One year ago, former President Donald Trump participated in what was likely one of the most bizarre press briefings of his presidency, where he suggested using an “injection” of disinfectant to combat the coronavirus pandemic.

The moment sparked a heap of mockery and shock on the internet at the time, and today’s anniversary was no different, with several people online marking the occasion by tweeting: “Happy drink bleachiversary.”

Trump made the remarks during a daily press conference about the U.S. efforts to respond to the pandemic.

During the conference, the former president talked about the use of ultraviolet light before pivoting to remarks that caused an uproar on the internet and beyond.

“And then I see the disinfectant, where it knocks it out in a minute, one minute. And is there a way we can do something like that by injection inside or almost a cleaning?” Trump said. “Because you see it gets in the lungs and it does a tremendous number on the lungs, so it’d be interesting to check that, so that you’re going to have to use medical doctors with, but it sounds interesting to me.”

The uproar grew so loud that the companies that make Lysol and Clorox put out statements urging people not to ingest or inject disinfectants.

A few months later, Trump insisted that he was “kidding” about the injection of disinfectant after then-Democratic presidential candidate Joe Biden brought up the remarks during a debate.

But the “injection” of disinfectant remarks clearly made a lasting impression on Twitter users, who marked the anniversary today.

They were far from the only people to mark the occasion.

“One year ago today, Trump suggested injecting people with bleach,” @chuck_chalupka tweeted. “Does anyone miss his bullshit?

The consensus in his replies was a resounding, “No.”