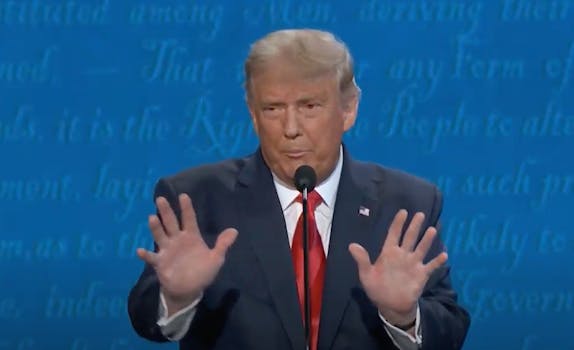 Trump says he was kidding about injecting bleach

It didn't seem like a joke at the time.

President Donald Trump said he was kidding when he recommended people inject themselves with bleach as a potential treatment for COVID-19 at Thursday night’s Presidential debate.

The second presidential debate began with the candidates being asked about their plans for tackling the pandemic. While Trump touted that there could have been more American deaths, Democratic presidential candidate, former Vice President Joe Biden focused on the more than 220,000 dead. Biden specifically brought up the disinformation, disseminated by the Trump administration, about the possibility of bleach as a treatment.

“What did the president say?” Biden began. “He said, ‘Don’t worry, it’s going to go away, be gone by Easter. Don’t worry, the warm weather, don’t worry, maybe inject bleach.’ He was kidding when he said that, but a lot of people thought he was serious.”

Trump responded directly to Biden’s charge, asserting that he was kidding.

“Look, perhaps just to finish this. I was kidding on that,” Trump said.

Trump mused about injecting disinfectants to treat a coronavirus-infected person during one of Trump’s task force briefings in April.

“And then I see the disinfectant, where it knocks it out in one minute. And is there a way we can do something like that, by injection inside or almost a cleaning, because you see it gets in the lungs and it does a tremendous number on the lungs, so it’d be interesting to check that,” Trump said according to PolitiFact.

People on Twitter did not see the joke in the president’s suggestions.

“Trump says he was kidding about injecting bleach! #debate#Debates2020,” someone tweeted.

“Why would a president kid about injecting bleach during a pandemic?” another added.

“As someone who has lost a family member to covid, let me just say “kidding” about injecting bleach is not, in fact, better than being serious about it,” someone else tweeted.

Medical experts advise that injecting bleach into the body is deadly.

“This notion of injecting or ingesting any type of cleansing product into the body is irresponsible, and it’s dangerous,” Dr. Vin Gupta, a global health expert and NBC contributor said. “It’s a common method that people utilize when they want to kill themselves.”