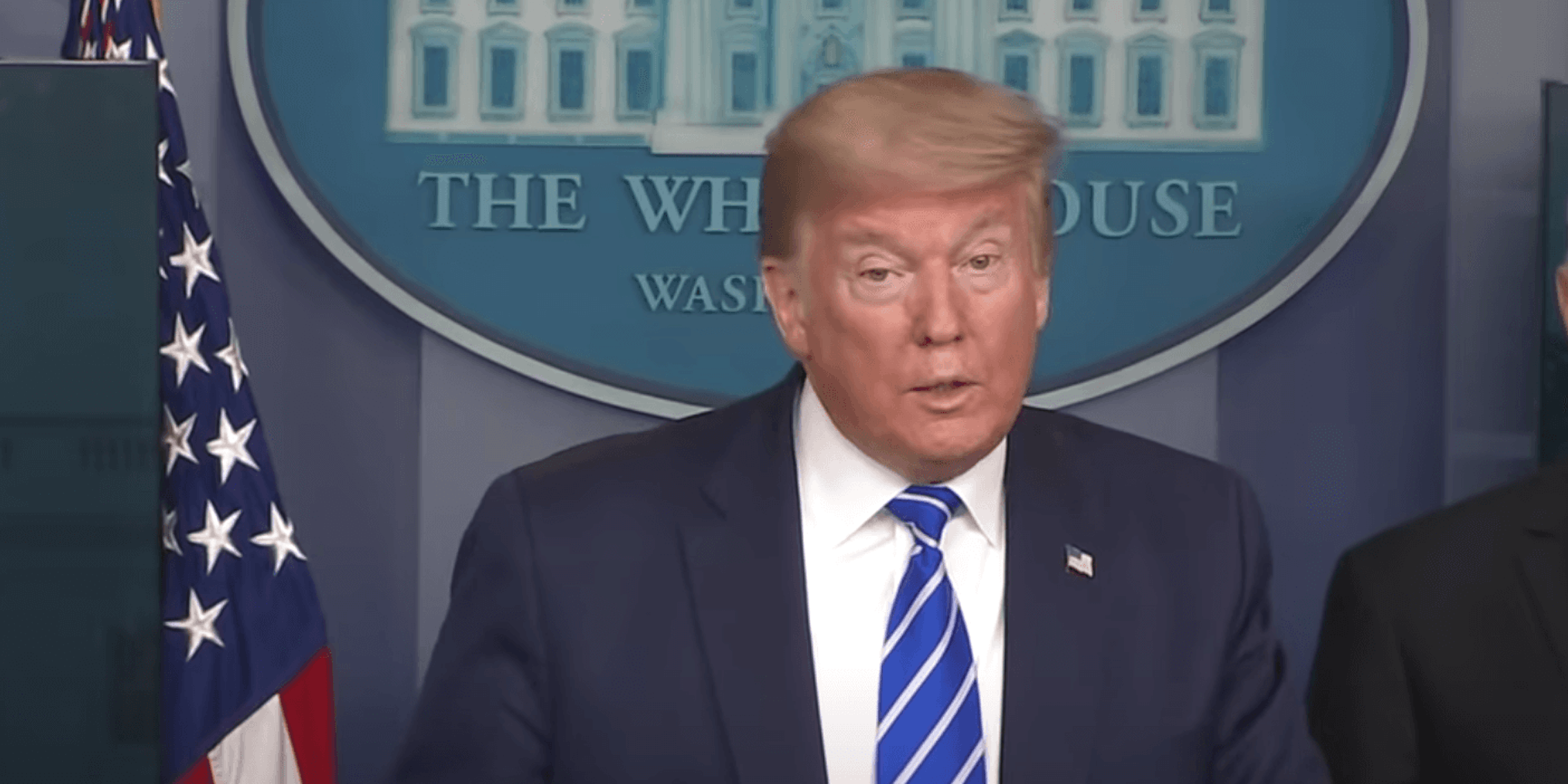 It would be an impressive effort if it wasn't so ridiculous.

On Thursday, at his daily press conference on the U.S. response to coronavirus, President Donald Trump offered one of his most deranged solutions to fighting the epidemic: injecting disinfectant into the body.

Or, he did nothing of the sort, instead discussing sound science, offering one potential optimistic tool in the fight against coronavirus.

It just depends how far you want to bend over backwards.

Trump suggested hitting the body with “ultraviolet light,” which he hoped could be “brought inside the body.” OK. Then, he added, “The disinfectant, where it knocks it out in a minute, and is there a way we can do something like that by injection inside, or almost a cleaning. It gets in the lungs.”

“You’re gonna have to use medical doctors,” Trump added.

“So, supposing when we hit the body with a tremendous, whether it’s ultraviolet or just very powerful light, and I think you said that hasn’t been checked, but you’re going to test it. And then I said supposing you brought the light inside the body, which you can do either through the skin or in some other way. And I think you said you’re going to test that too. Sounds interesting. And then I see the disinfectant, where it knocks it out in a minute, one minute. And is there a way we can do something like that by injection inside or almost a cleaning? Because you see it gets in the lungs and it does a tremendous number on the lungs, so it’d be interesting to check that, so that you’re going to have to use medical doctors with, but it sounds interesting to me. So, we’ll see, but the whole concept of the light, the way it kills it in one minute. That’s pretty powerful.”

The president didn’t specify what he meant by “disinfectant,” but it’s hard to ignore that in the moment before he said it, a giant sign behind him discussed how Americans could protect themselves with “disinfectant.”

Trump’s claims swiftly went viral online, with people saying Trump was a moron. The company that makes Lysol put out a statement warning people not to ingest or inject its products.

#DontDrinkBleach trended on Twitter, as did #disinfectant and #Lysol.

So, did the president say you should inject bleach? He specifically said “something like that.”

To Trump supporters, “something like that” clearly meant something different and safe. Not “that” but this other thing entirely.

Trump used the word “inject,” but what he meant was using a process — which he left “medical doctors” to define — in which patients’ lungs might be cleared of the virus, given new knowledge about its response to light and other factors.

When ABC News’ Jonathan Karl asked Dr. Bryant about whether the president had proposed injecting a person with “bleach and isopropyl alcohol” later, Trump clarified that “It wouldn’t be through injection,” and that he was talking about “cleaning, sterilization of an area,” and about applying the disinfectant to “a stationary object.”

The Daily Wire put out a similar article.

Some others pointed out that bots were trying to “correct” the record.

If you want to be extremely generous, that analysis isn’t utterly wrong. Trump said “if we could get something like that,” meaning something like a surface disinfectant that could safely get inside the lungs—that would be a tremendous solution.

That would be OK, but the president, who is a notoriously poor communicator, doesn’t deserve the benefit of the doubt, nor should Americans be forced to parse every subordinate clause to get what he really means.

Trump said “something like injecting disinfectant.” No matter how you want to dance around it, it’s not unreasonable to think he made an absurd and dangerous statement.