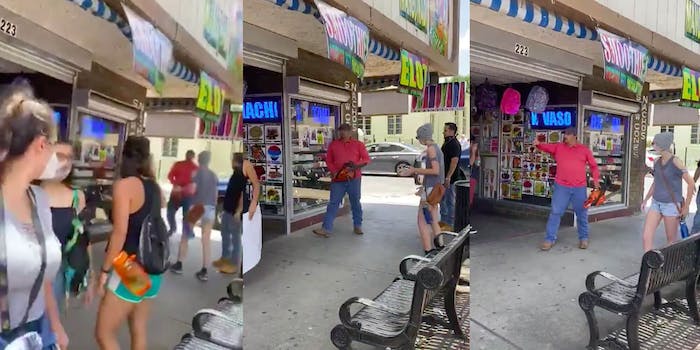 He shouted the N-word at them.

A man has been detained after being seen on video brandishing a chainsaw and trying to disperse a crowd of Black Lives Matter protesters.

The video was posted on Friday afternoon with the caption, “Downtown McAllen,” referring to a city in South Texas. In the widely-shared video, the man begins to walk toward a crowd wearing masks and signs, yelling things like “move,” “go home,” and “go.” A person in the background can be heard asking someone to call 911.

The crowd told the man, “We are walking. … That’s all we are doing.”

McAllen Police Chief Victor Rodriguez spoke with the Monitor, saying, “We’ve identified that person, we’ve detained that person and are continuing our investigation into the particular incident.” Local authorities have reportedly chosen to keep his identity confidential.

One of the women among the crowd, Lorena Houghton, later spoke with the Monitor to explain what happened. “We were just walking, because we were walking over here by ourselves,” she said. “It was a group of like six or seven, and we were just trying to cross the street and someone stopped in the middle of the crosswalk and started yelling at the girl in front.”

The man, according to Houghton, grabbed a poster out of a woman’s hands right before he grabbed his chainsaw and began to rev it. “It’s very scary,” she said. “I think that the exact point they were trying to make is that they didn’t think that Black Lives Matter was necessary here, but I think he disproved his own point by violently attacking people that were walking on the street.”