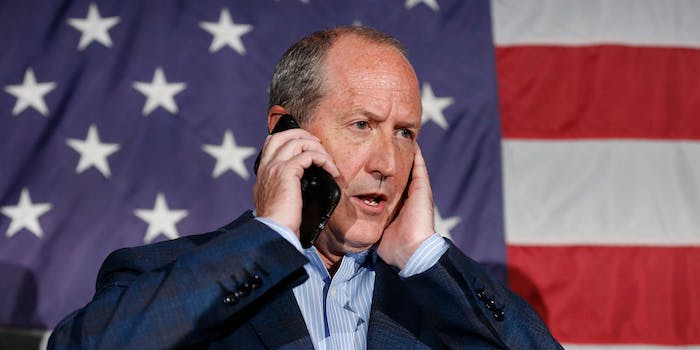 He picked three people at random.

Rep. Dan Bishop (R-N.C.) apparently decided to help Trump do some investigating by creating his own list of antifa members on Twitter.

The list was first noticed by @DrPepperSeltzer, a Twitter user with 16 followers as of this writing. Seltzer tweeted with bemusement that he’d made the list of three “antifa.”

“I’m beyond thrilled to be on the same super, duper official antifa list [as @socialistdogmom],” he tweeted, adding, “Who knew antifa was such a small group???”

Molly Conger, who goes by @socialistdogmom, was similarly amused by Bishop’s assumption.

“lmao Dan, what the hell,” Conger tweeted. “Dan, do you need help using this website,” she later joked.

It is not clear what criteria, if any, Rep. Bishop used to come up with his list of “antifa.” Neither of the two accounts have previously interacted with Bishop, according to the platform’s search function, though tweets could’ve been deleted. Seltzer confirmed that he hasn’t interacted with Bishop and said he doesn’t live in his district, either.

Seltzer told the Daily Dot via messenger, “I assume that Bishop added me [because] I posted the hashtag IAmAntifa at some point recently, along with my retweets and comments angrily denouncing police brutality and cops in general. I also occasionally retweet anti-capitalist posts as well.”

Cooper has previously implied an affinity for antifa.

But so have thousands of others and thousands have also tweeted #IAmAntifa. Yet only three accounts made Bishop’s list.

A more readily apparent commonality between Cooper and Seltzer is the word “socialist.” Cooper identifies as socialist in her Twitter handle; Seltzer in his Twitter bio.

Although some socialists may also be anti-fascist, or antifa, the two are not the same.

It is entirely possible that Bishop’s just confused. After all, one day after the deadly Unite the Right rally, he likened white supremacists to Black Lives Matter and antifa—which are definitely not the same.

While it is arguably amusing that a member of Congress would use a few tweets or references to socialism to identify citizens as “antifa,” it’s also potentially dangerous. Now that the president has decreed that antifa are terrorists, such could have serious consequences, up to and including imprisonment.

Although there are some groups around the country, given that antifa isn’t actually an organization, but a belief system associated with opposing fascism and white supremacy, Trump’s decree also opens the door to labeling people terrorists based on entirely subjective criteria.

Seltzer told the Daily Dot that though the congressman may have “just meant it as cultural war posturing,” it was “incredibly reckless” of Bishop to identify them as antifa.

“I find such actions by an elected representative to be highly degrading to his public office, especially given Trump’s tweet about declaring antifa a terrorist organization,” he said.