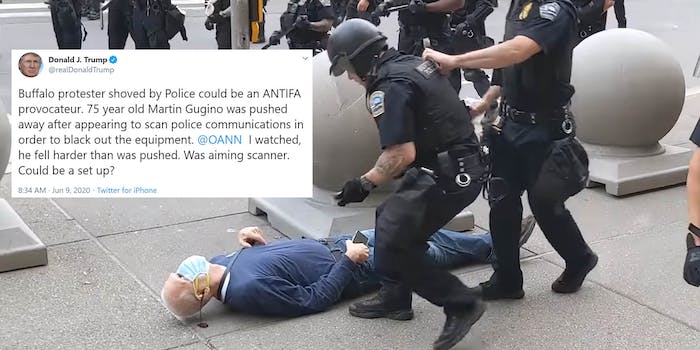 Trump is terrified of Antifa Grandpa

But in real life, he’s cowered, balking at his own boasts to send in the military, and being taken to a bunker then seemingly lying about it when protesters gathered outside the White House.

Someone might see the dichotomy between their bluster on the internet and real-world actions, but the president appears to not notice one bit.

And online, he’s perfectly fine throwing out threats and organizing harassment. His latest target? An old man in Buffalo.

Last week, two Buffalo policemen were suspended and charged after video showed they shoved an elderly man to the ground, cracking his head open.

Police initially lied about the encounter, saying he tripped and fell, but video revealed the man was attempting to return a helmet to the cops.

Now, the president is trying to paint the man as antifa, without any evidence.

“Buffalo protester shoved by Police could be an ANTIFA provocateur,” Trump wrote on Twitter. “75 year old Martin Gugino was pushed away after appearing to scan police communications in order to black out the equipment. @OANN I watched, he fell harder than was pushed. Was aiming scanner. Could be a set up?”

Right-wingers have been trying to defend the cops in the incident, and it appears their work has made it up to the president.

And without any evidence, from a report on a conspiracy-laden network that has no standards for truth, the president is naming a citizen—who hasn’t been charged with anything (the police have)—and declaring him part of a group that he is trying to deem a terror network.

The segment Trump watched appears to be based on a report from Conservative Treehouse, which speculates wildly about Gugino without much to back it up.

As Trump has cowered behind the White House fences—and even extended them further—he has no problem declaring a 75-year-old man a terrorist on Twitter.

It’s one thing to need to be taken to a bunker because of an amassing protest, but now the president is apparently afraid of a man two years older than him, who lives almost 400 miles away.

Who is still in the hospital.