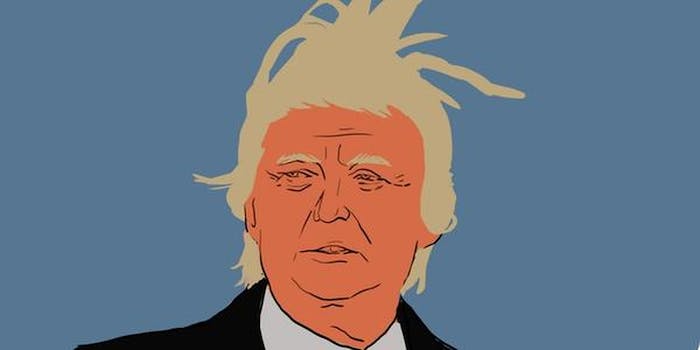 Be honest, when was the last time you paid a visit to DonaldJtrump.com?

It’s probably to no one’s surprise that neither donaldjtrump.com nor bencarson.com will ever win a Web-design contest.

Campaign websites are notoriously dry, filled to the brim with on-message copy and high-resolution shots showing even the dowdiest candidates at their best angles. The campaign sites of Donald Trump and Ben Carson, “outsider” candidates and the current GOP frontrunners, are light on material—Carson’s doesn’t even detail his tax plan. But if poll numbers and media mentions have a positive relationship with page views, it makes sense that both sites will still see plenty of visitors. Turns out that’s not the case.

Internet activity on the campaign websites of 2016 presidential contenders Trump and Carson rank last among the rest of the GOP field, according to a study released this week by analytics firm DataPulse. On the flip-side, the campaign websites of Sen. Marco Rubio (R-Fla.) and Carly Fiorina respectively had the largest and second-largest share of traffic among the six GOP candidates in the study, which was conducted over Oct. 27 through Nov. 1.

While the night of the third GOP debate unleashed a fact-checking frenzy on all candidates, the event drove the most significant traffic driver for Rubio. Traffic to Trump’s site rose sharply the day after the debate, perhaps due to people checking up on the claim that Trump called Rubio “Mark Zuckerberg’s personal senator”. (Turns out he did, on his campaign site, no less.) But the interest was fleeting, and traffic to Trump’s site fell significantly the next day, and fell back to normal levels by Friday. Lagging interest in former Florida Gov. Jeb Bush‘s campaign site seems in line with lagging interest in Jeb Bush. Bush’s site went from being second in Internet activity to third after his tepid performance during last week’s debate. Fiorina’s strong showing during the debate stirred up more interest in the former Hewlett-Packard CEO’s site.

But that leaves the outliers of Trump and Carson, who are leading in the polls over all the other GOP candidates.

Jeff Schmidt, CEO of DataPulse, threw out a few theories during a phone interview with the Daily Dot on Tuesday evening:

1) Trump and Carson are relative political outsiders, and their campaign operations are not actively drawing traffic to their sites.

2) Trump and Carson voters may not be necessarily the most data-driven electorate, and they might not feel compelled to hunt for information on the official candidate websites.

3) The sheer amount of consistent media coverage focused on Trump and Carson may be an alternative or preferable source of information for voters instead.

Schmidt warned that the methodology the study uses is still a “new science,” adding that the study looked at infrastructure and routing to the websites they analyzed rather than having direct access to site traffic. He declined to disclose exactly what variables the study used to measure “Internet activity” on the campaign websites, only revealing that one involved IP addresses.

There are obvious pitfalls to using campaign websites as an indicator of public interest. A look at a chart generated on Google Trends shows that Rubio was the top-searched Republican candidate  during last week’s debate, followed by Trump and Carson. 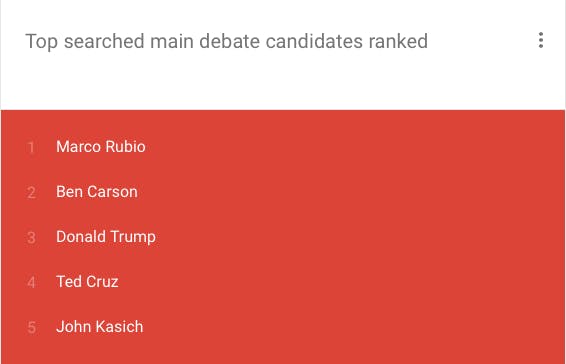 After the Republican debate? Carson and Trump took the lead in Google search results again. 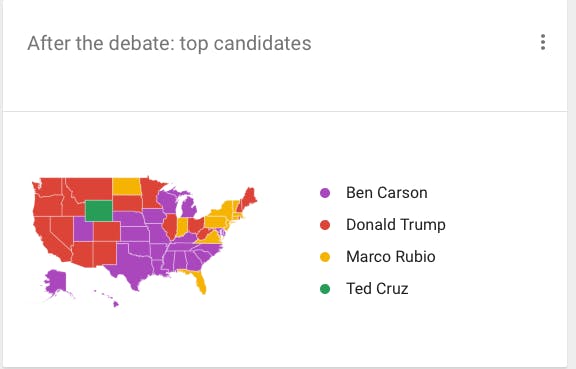 The Internet may be a good measure of public curiosity, but its use as a measure of electoral support is lightyears away from being an exact science. In today’s media-saturated campaign environment, an uptick in page views and search results is a fleeting arbiter of success; the jury is out on how well a candidate’s ability to go viral translates to actual votes in Election 2016.

Schmidt hopes that calculating engagement on campaign websites will result in data of a more substantive kind. Data on not just voters who enjoy following the horse race, but on those who take the time to read through a candidate’s views on immigration or education.

“How connected are people that say they support Ben Carson actually to him? Are they visiting his website, are they subscribing to his e-mail lists? Or
is it just a passing fad?” asked Schmidt.

Another one of the study’s findings indicated that campaign websites of former Secretary of State Hillary Clinton and Sen. Bernie Sanders (I-Vt.) get a larger share of Internet activity than the sites of all of the top six Republican candidates combined. Internet activity on GOP campaign sites saw a surge the day after the debate but fell below that of the Democratic presidential candidates the next day.

Clinton’s campaign website yields more activity than the entire Republican field, as well the junior senator from Vermont, according to Schmidt.

“…Clinton’s activity is off the charts when compared to all the Republicans,” said Schmidt, “yet Republicans are all that anyone is talking about right now.”