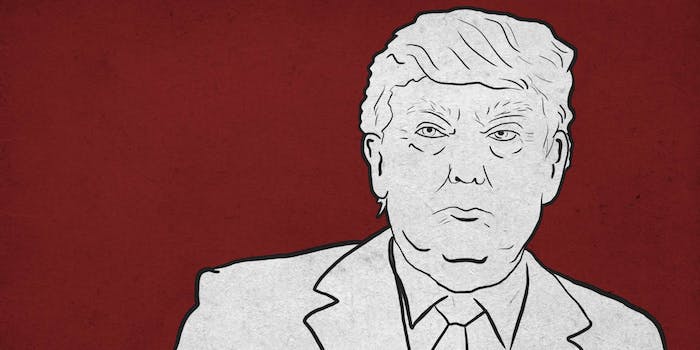 Donald Trump is an “incredibly generous person”—just ask his butler.

Specifically, the billionaire Republican presidential front-runner is big on handing out unsolicited advice. Take this piece of advice he dispensed via Twitter to Vermont Sen. Bernie Sanders, who is trailing former Secretary of State Hillary Clinton for the Democratic presidential nomination.

Bernie Sanders has been treated terribly by the Democrats—both with delegates & otherwise. He should show them, and run as an Independent!

Trump’s comment was in reaction to a number of battles Sanders—who was elected to the Senate as an independent, but caucuses with the Democrats—has fought with the Democratic Party over the course of the campaign. For example, the Democratic National Committee scheduled a large number of debates on weekend evenings, when viewership would be lower, thereby helping Clinton—intentionally or not—who went into the contest with considerably higher name recognition than her opponent.

There’s also the issue of superdelegates, party officials and activists who are able to support whichever Democratic candidate they choose, in contrast to pledged delegates, who assign their support based on the results of primary votes. A Democratic candidate needs to obtain the support of 2,382 delegates to win the party’s presidential nomination, meaning the 712 available superdelegates—518 of them currently support Clinton—constitute a huge advantage. Sanders partisans have slammed the superdeleagete system as inherently undemocratic.

When asked about his perception of being treated fairly by the party during an interview with Meet The Press host Chuck Todd over the weekend, Sanders minimized his disagreements with the party as the inevitable reaction to an insurgent challenging the party establishment.

However, Trump’s advice in this case may, shockingly, be more than a little self-interested. A third-party or independent run by Sanders could bleed off enough votes from a Clinton ticket to make a victory by the GOP nominee all but assured.

Or, to put it another way:

“I am watching television—and I am seeing ad, after ad, after ad put in by the establishment, knocking the hell out of me, and it’s really unfair,” Trump said during an interview on Morning Joe last month. “But if I leave, if I go, regardless of independent, which I may do—I mean, may or may not. But if I go, I will tell you, these millions of people that joined, they’re all coming with me.”

While representatives from Sanders campaign did not respond to a request for comment, it appears to have responded to Trump’s suggestion—by blaming Clinton for using the same tactic.

Shortly after Trump’s tweet encouraging Sanders to mount an independent run, Sanders campaign manager Jeff Weaver sent out a fundraising email charging the Clinton campaign and its surrogates with making a similar argument: that Sanders is primarily acting as a spoiler for the Clinton’s chances in the general election.

Over the past few days, Hillary Clinton’s campaign and some of its top supporters have launched an odd new line of attack against people like you who stand with Bernie. They are saying that by continuing to campaign and fight for every vote, for every delegate, that we are helping Donald Trump.

They’ve used language reserved for traitors to our country, saying we are “giving aid and comfort” to Trump. They are emailing supporters with the subject line “What Trump loves about Bernie.”

Let me be clear, there is one candidate in this Democratic primary who Donald Trump said would make a “great president,” and it’s not Bernie Sanders.

Trump, for his part, quickly moved on to other concerns, like tweeting an insult at the New York Times.

How bad is the New York Times—the most inaccurate coverage constantly. Always trying to belittle. Paper has lost its way!