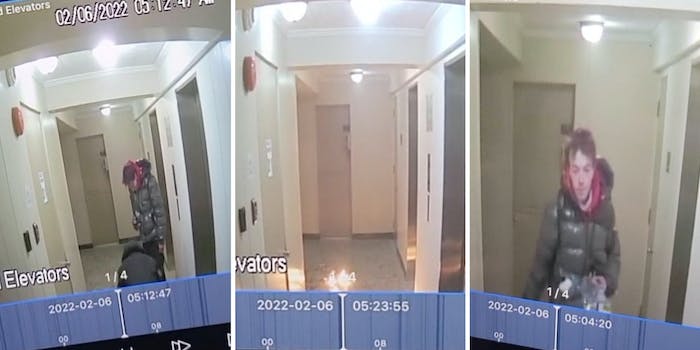 The men reportedly admitted they were involved with the trucker protest.

Screengrabs of surveillance footage posted on Twitter show two men allegedly attempting to burn down an apartment building in the epicenter of a trucker protest this weekend.

The alleged arson attempt occurred in downtown Ottawa, Canada, which has been besieged by people protesting vaccine mandates and other pandemic restrictions. The protest began with the trucking industry but has expanded rapidly as it’s been embraced by right-wing figures in the U.S. and Canada. The truckers are in Ottawa because it is the capital of Canada; thus, in their view, the best place to seek redress of grievances about COVID-19 restrictions.

People associated with the protests have occupied a portion of downtown Ottawa for days. Protesters continue disrupting everyday life by blocking traffic, assaulting people, sounding horns, and lighting fireworks all hours of the day and night.

Residents of one apartment building clashed with protesters over the weekend. In the early hours of Sunday morning, two men reportedly tried to get back at them by trapping them inside and setting the building on fire.

“Last night two arsonists brought a full package of firestarter bricks into our building’s lobby at 5AM,” Muñoz wrote.

Muñoz, who lives in the building, said one of the men taped the doors shut. “This is the most insidious part of the experience besides the lighting of the fire,” he wrote.

He included screenshots from security footage allegedly showing the pair trying to start the fire and taping the doors. He said the landlord let them see the footage.

He said that one resident came into the hallway as the men were trying to light the fire. Asked what they were doing there, he said that they admitted to being part of the trucker protest.

When someone wondered why the pair would admit to being protesters, Muñoz opined, “They seem really dumb.”

He said the resident made a hasty retreat into an elevator and the men continued trying to set the building ablaze.

“Once lit, it grew and nearly touched the wood panel walls,” Muñoz tweeted. “The arsonists escaped out the side door as video shows the fire growing.”

Luckily, a Good Samaritan walking past reportedly noticed the fire. After some struggle with the taped doors, Muñoz said they were able to gain entry and extinguish it.

Muñoz and other residents believe that the arson attempt was inspired by a confrontation between the groups earlier in the evening.

“It is clear to us, as residents, that this was a blatant reprisal by protesters,” Muñoz wrote. “Not only have they subjected Ottawa residents to widespread harassment, assault, and aggression, but now an attempt to light an entire building on fire.”

Muñoz tagged the mayor and local police in the thread and later wrote that police are investigating. The Ottawa police didn’t respond to an emailed inquiry sent Monday morning.

Ottawa City Councillor Catherine McKenney replied from their verified account, “I’ve brought this to the attention of police and have requested extra security.”

People were horrified by Muñoz’s allegations. Local residents’ patience with the trucker protests has worn thin in the wake of ceaseless noise and other disruptions.

There are multiple reports of sound levels at 100 decibels or higher at all hours of the day and night. CTV News reports that an Ottawa resident has filed a nearly $10 million class-action lawsuit against protest organizers over the noise.

Local police say they issued hundreds of tickets and made multiple arrests associated with the protests over the weekend. They’re now advising demonstrators to leave and threatening anyone who brings supplies, such as fuel, with arrest.

“There are over 60 criminal investigations so far related to the demonstration,” Ottawa Police Service wrote on Facebook on Sunday. “They are primarily for mischief, thefts, hate crimes and property damage.”

Many felt that the men who reportedly tried to set fire to the apartment building should be charged with a serious crime, up to and including terrorism. “It was more than arson! ATTEMPTED MURDER!” wrote one.

An individual identifying themselves as head of the police arson unit replied to Muñoz’s thread asking to talk over the phone to possibly initiate an investigation.

Muñoz tweeted that he’d verified the person is police and would follow up.