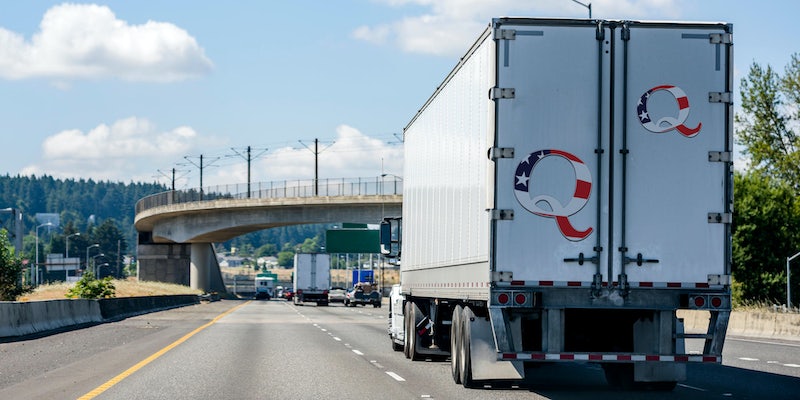 Protesters have moved to other platforms where they're doxing perceived enemies and spreading conspiracy theories.

Facebook has suspended groups associated with trucker protests of pandemic restrictions in the United States and Canada. The company cited its policies prohibiting QAnon content and inauthentic activity.

Now the protest movements have moved to alternative platforms. People sympathetic to it have begun doxing those suspected of planning a counter-protest, calling for illegal activity, and spreading QAnon conspiracy theories.

Canadian truckers have been protesting COVID-19 vaccine mandates for days, driving in a convoy across the country. Thousands involved in the protest flooded the Canadian capital of Ottawa this week, sparking reports Prime Minster Justin Trudeau had fled for his safety.

Protesters there generated headlines in both nations after they were seen waving Confederate flags over the weekend.

On Wednesday, the truckers and other protesters blocked a U.S.-Canada border crossing. Authorities in Canada have deemed it an “unlawful blockade.”

The Washington Post reported on Wednesday that Canadian authorities are planning to take action against the blockade at the border.

Facebook groups supporting the truckers in both the U.S. and Canada had swelled rapidly throughout the protest. A Canadian group reportedly had 600,000 members. One group in the United States planning a similar protest rapidly attracted tens of thousands of members before it was shut down.

Facebook confirmed that it had suspended groups associated with these efforts. In a statement sent via email to the Daily Dot Wednesday afternoon, a company spokesperson said, “We have removed multiple groups for repeatedly violating our policies around QAnon and using spammy tactics to mislead people about the origin and popularity of the group’s content.”

Appearing on Fox & Friends Wednesday morning, a co-organizer of the group Convoy to D.C. 2022 disputed the allegation that it had violated Facebook’s policies prohibiting the QAnon conspiracy theory, which holds that a global cabal of satanic pedophiles runs the world. Convoy to D.C. 2022 is planning a protest of truckers driving from California to the nation’s capital.

“They actually had offered the administrators to remove content and then request to review again. They didn’t even give that option,” co-organizer Brian Base reportedly said.

“They literally wiped Mike Landis and Jeremy completely out of Facebook,” he added, referring to other organizers of the group. “They don’t even have a profile anymore, so how are you supposed to request a review or remove anything?”

Truckers and their supporters have since turned to alternative platforms such as Gab, Telegram, and 4chan. Tens of thousands have joined in a matter of days. A Telegram group for a convoy from Ottawa, Canada to Washington, D.C. has nearly 30,000 subscribers as of this writing.

Posts there and on other platforms by people sympathetic to the truckers range widely from general expressions of support to calls for violence and other illegal activities. Some usernames and posts invoke QAnon themes and sayings.

“We can do infiltration, fuckery, and doxing too, Leftoids,” a member of the Canadian Truckers Convoy Gab group wrote on Wednesday.

The post included links to a 4chan thread discussing the convey and the URL for a Discord server where they say people are planning a counter-protest.

Posts on that thread include addresses and contact information for people who supposedly support the counter-protest. One suggests the person they doxed is a pedophile and writes, “Anyone know any of these cux addresses yet? I’m thinking they might want to order some cheese pizzas.”

Ordering food delivered to a perceived enemy’s address is a common tactic people, particularly on the far-right, use to spread fear.

Other posts refer to people who oppose the truckers with homophobic and transphobic slurs.

One anonymous 4chan user asked if anyone’s good at creating deepfakes. It’s not known for what purpose.

Some claim that they’ve infiltrated counter-protesters’ Discord server or are in the process of doing so.

Via direct message, an administrator of one told the Daily Dot that things have been calm on the server. “There’s been nothing major today,” they said. “The members we have have been mostly focused on helping others in the area.”

Meanwhile, a member of the American Freedom Convoy 2022 Gab group suggested shutting down the Super Bowl as a way to “accomplish their goal quickly without having to drive very far!”

Another member of the group commented, “Great idea. Surround the stadium like the Walls of Jerricho [sic] and ‘sound your horns’ during a play. Everyone watching the game on TV will hear it. The walls will fall.”

Trucker protests are planned to continue in both the U.S. and Canada.