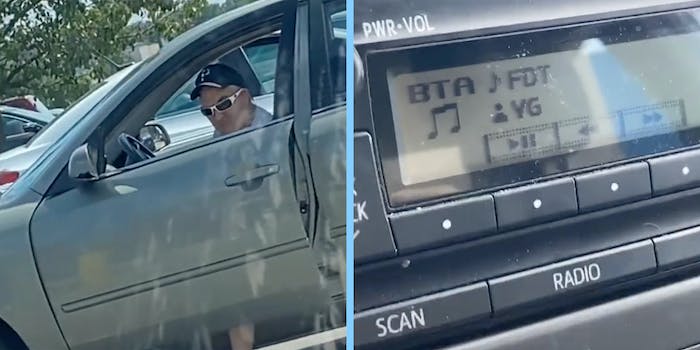 'I see I'm not the only one who woke up and chose violence.'

A TikToker is being praised for her response to a man she says was yelling at a woman about her President Joe Biden bumper sticker.

Sydney Rae (@sydneynotcrosby) wrote, “This guy next to me was yelling at some lady a minute ago about her Biden 2020 sticker so [I] decided to play this gem for him.”

As the song plays, Rae zooms in on a young white guy sitting in a parked car. His aging, tan sedan has a Trump 2024 sticker.

Rae included a string of pro-Democrat, anti-Trump hashtags, including #biden2020 and #trumplost.

The vast majority of the hundreds who commented on the TikTok were bigly amused. Many shared that they had also used the song to torment Trump supporters. Those unfamiliar with “FDT (Fuck Donald Trump)” commented that they were immediately downloading it.

“My neighbors still have hurt feelings over this song,” said one. “Might have been the laughing too.”

“Not all heroes wear capes!” one of Rae’s many fans said. One shared that they, too, are this “level of petty.”

“I see I’m not the only one who woke up and chose violence,” opined another.

Some Trump supporters were less than impressed. “That was so very mature of you. Grow up,” said one.

Rae seems unbothered by such criticisms.

“Btw to any of the Trump supporters in the comments—THIS GUY started it by yelling at the woman,” she commented. “I was just ending it.”