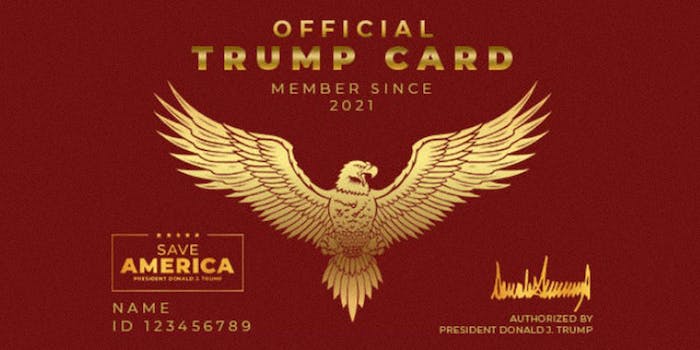 In a recent email to supporters, former President Donald Trump asked his fans to help pick a design for a new card, such that they could become card-carrying members of the Trump fan club.

“The card you select will be carried by Patriots all around the Country,” Trump wrote, according to an email reviewed by Business Insider. “They will be a sign of your dedicated support to our movement to SAVE AMERICA, and I’m putting my full trust in you.”

In July 2020, he did the same thing with Trump “Platinum Cards.”

But one particular design in this email caught the eye of Twitter users.

That’s because its look, with an eagle’s wings fully spread and head cocked to the left, resembled the Parteiadler, the eagle standing over a swastika that the Nazis used.

This is not the first time something from Trump has been compared to a scene out of Germany in the 1940s.

His ads about antifa had alleged Nazi imagery, his tweets were accused of being Nazi dogwhistles, and even his decisions to lower flags after tragedies were called out for being a secret code to neo-Nazis.