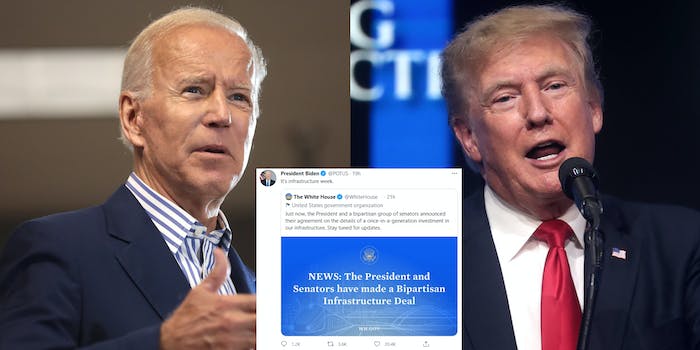 Biden's callback to 'Infrastructure Week' got a lot of people's attention.

Following an announcement that the White House and a group of bipartisan senators had reached an agreement on an infrastructure deal, President Joe Biden tweeted one simple sentence: “It’s infrastructure week.”

There were no emojis, no exclamation marks, no long-winded oration of celebration from the president in his triumphant moment. But a good old fashioned callback to a long-running meme can still speak a thousand words.

Some Twitter users were quick to point out that the current president could have been trolling his predecessor, former President Donald Trump—who held an “Infrastructure Week” each year he was in office without making much progress on it.

The Trump administration’s attempt to brand a week’s theme as “infrastructure” always seemed to get derailed. Trump marketed his “Infrastructure Week” as a time to bring both parties together to discuss funding for the country’s roads, bridges, or broadband networks.

Instead, Trump used the opportunity to criticize opponents and may have wanted to create a distraction from scandals and investigations, as the New York Times reported in 2019.

So naturally, Biden’s callback to that fact caught a lot of people’s attention.

“The classiest burn you’ll ever see,” another person said.

But many other people noticed Biden’s trolling of Trump.