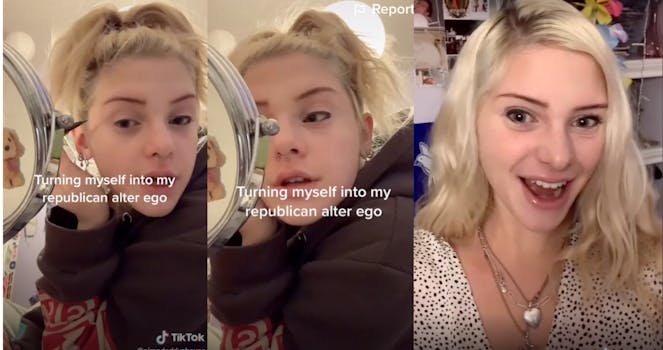 'Republicansonas' are heavy on bronzer and pink, and light on authenticity.

Girls on TikTok are giving themselves makeovers to look like Republicans.

To create their “Republicansona,’ a mashup of “Republican” and “persona,” users of the Generation Z-dominated platform remove all evidence of their countercultural leanings and remake themselves as the epitome of a Fox News host or Republican spokesperson.

Gone are the piercings, fluorescent tresses, and quirky makeup. In their place, there’s cakey bronzer, gobs of mascara, and, of course, blonde hair.

“Hi, my name is Shayna and my dad is a cop,” @pimpdaddyshayne captioned her video. With more than 200,000 views as of this writing, @pimpdaddyshayne’s TikTok is one of the most viewed Republicansona transformations.

The makeovers are set to RaeLynn’s song “God Made Girls.” As RaeLynn croons, “Somebody’s gotta wear a pretty skirt/Somebody’s gotta be the one to flirt,” the free-spirited girls of TikTok turn themselves into Kayleigh McEnany clones.

TikToker @katyasbrokenacrylicnail added cheeky instructions to her Republicansona makeover montage. “No such thing as too much bronzer,” “PINK blush is best,” “last but not least …. Jesus,” and “we are only here to serve men,” flash by as she remakes herself.

The Republicansona-fications have been met with a mix of amusement and hurt feelings, mostly along partisan lines.

“Went from alt-girl to alt-right real quick,” one person commented on one such makeover video.

“It’s not nice to mock people,” scolded another.

A few feel like it’s in poor taste to make fun of Republicans’ appearances.

More people saw it for the lighthearted fun that it is, though some suggested that the makeovers would be more realistic if they made their faces a deep shade of orange.

For many, the transformations bore an eerie resemblance to people they were already familiar with.

One thought that a TikToker’s Republicansona looked like Kaitlin Bennett, better known as the Kent State gun girl. Other doppelgangers hit closer to home.

“Tell me why they all look like my shitty freshman year roommate, right down to the eyeliner and mascara and infinity scarves I can’t,” commented a Twitter user.

“I’m not a Republican but every time these videos come up it’s my exact makeup routine,” said one TikToker. “I’m gonna go cry now.”