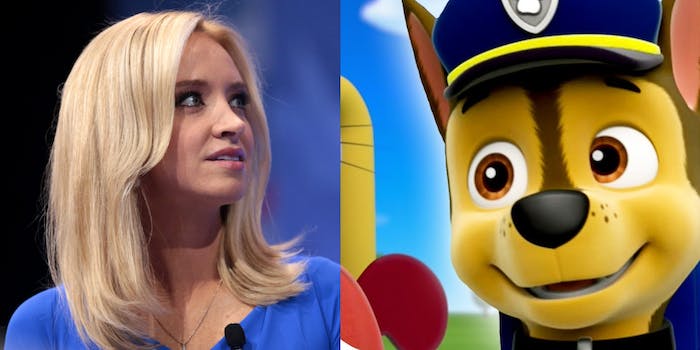 That wasn't the only false claim made by the White House Press Secretary.

While speaking to the press, McEnany cited the non-existent cancelation of the Nickelodeon series while denouncing “cancel culture.”

“We saw a few weeks ago that Paw Patrol, a cartoon show about cops, was canceled,” she said. “The show ‘Cops’ was canceled, ‘Live PD’ was canceled. Lego halted the sales of their Lego City Police. It’s really unfortunate.”

While some law enforcement-related shows have been canceled following the police killing of George Floyd, claims surrounding Paw Patrol are nothing more than internet lore.

It turns out McEnany’s remarks regarding LEGO are also false. The company did not stop producing and selling its police toy sets but merely halted marketing temporarily.

McEnany’s statement caused the term “Paw Patrol” to become a trending topic on Twitter. The White House thus far has not responded to criticisms over the false remark.

Online, people had previously joked that Chase, the police dog, should be canceled. But nothing of the sort has happened.

Update 3:41pm CT: In a tweet, Paw Patrol reiterated the fact that they were not canceled.