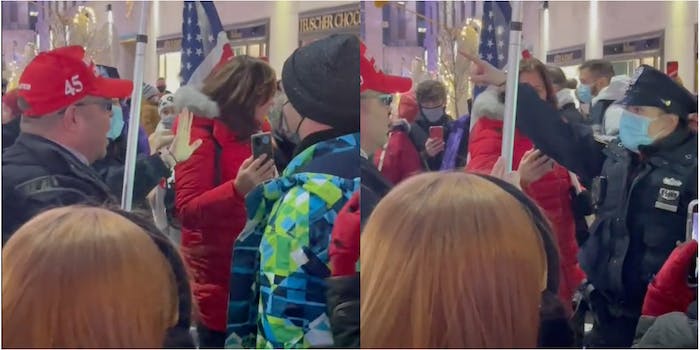 Cop says ‘f*ck you’ to Trump supporter in viral TikTok

The MAGA fan didn't back the blue here.

A female NYPD police officer is going viral on TikTok. for getting in a screaming match with a President Donald Trump supporter.

The fierce altercation between a Trump supporter, a cop, and a bystander is spreading across the internet. In it, a group of MAGA hat-wearing and American flags-waving fans gathered in front of a Saks Fifth Avenue window show at Rockefeller Center on Monday. After one man told them to leave, things got rowdy.

And @megrahbah on TikTok recorded much of the encounter.

The video shows the clash beginning with one man telling a maskless Trump supporter to step away. The Trump supporter begins to yell, “for four years, I had to put up with your shit,” when the cop intervenes by shouting, “I am talking.”

The Trump support quickly yells back, “I don’t give a fuck,” and refuses to leave after the cop tells him to “get the fuck out of here.”

In an attempt to control the crowd, the cop begins speaking with the other man. This enrages the Trump crowd even more and results in a back-and-forth of “fuck you” between the agitator and the cop.

The video picks up audio from both sides of the crowd. Some yell, “they started it,” while others shout, “put on a mask” and “I thought Trump supporters were supposed to support the police.”

The account that posted the now viral videos followed up with three additional posts to provide context.

“And that’s when the group showed up and started shouting profanities, saying how it’s Proud Boy’s turn,” she says.

The Proud Boys are an all-male, far-right militia organization with sworn allegiance to Trump. The president even mentioned the Proud Boy in a debate with President-elect Joe Biden. At the time, he told the Proud Boys to “stand by.”

In the second explanation video, the TikTok user explained how one bystander approached the man in the MAGA hat saying that they should leave as kids are around.

“And of course MAGA dude is like ‘absolutely not, F you, we’re not going anywhere, we have the right to stand here and protest,” she says.

Then, in the third video, she explains how things exploded when the female cop arrives. She says how the female cop was “not being treated with respect whatsoever by the MAGA dude.” Only when male cops arrive, the Trump crowd calms down.

“And it actually wasn’t until a couple male officers finally showed up that the situation started to deescalate,” she says.

She also notes that she was not sure if the “MAGA dude” was arrested following the dispute.

But, she was eventually able to watch the window show even with the political feud nearby.